For those new to the series, plural protagonism is based on this article I wrote for PopMatters. Plural protagonism occurs in a game when there is no individual main protagonist leading a group: the group itself becomes the hero. Each individual maintains their identity while contributing to the narrative in equal measure. Moreover, they are all controlled equally by the player and coordinate as a collective consciousness to overcome the challenges facing them. This narrative technique appears most prominently in JRPGs and this series investigates different JRPGs that feature plural protagonism in interesting ways.

Square-Enix’s 1995 release, Chrono Trigger, is, by now, something akin to a JRPG gospel. It is one of the best known games in history and its influence and importance are self-evident. Being released in a time when each Final Fantasy was still a relative gamble for Square, Chrono Trigger secured the company’s reputation in the west. It also has the benefit of being a really good game, one that deserves special mention in its treatment of group dynamics. While the collective is important to JRPGs, Chrono Trigger goes further and posits that the virtues of cooperation aren’t just worth working toward, they’re a necessary component of human nature.

There is no enemy in Chrono Trigger. There is a rotating cast of antagonists to give the player-party henchmen, mini-bosses and a proverbial dragon at the end of each dungeon, but there is not an ultimate enemy with a personal interest in undoing the party’s efforts. Lavos is the world’s big-bad, but Lavos isn’t a person. It isn’t even sentient; Lavos’s presence on the planet is coincidenal. It is a purely destructive accident that operates with insectile self-interest rather than out of organized malice.

Opposite Lavos is the—by now familiar—collective of individuals united by a common goal. The game, based around time travel, brings the cast to every time period where Lavos has an impact on history and a champion from each age volunteers to join the party; together the group works to prevent Lavos’s inevitable apocalypse. None of these members protest or doubt their mission and none—save for the optional party member—need any convincing to join. As soon as each member learns about Lavos, they join up. Once they learn of the creature that threatens their planet (not even in their own time period, but in a distant future generation) they join in the effort to save their world. However, the party’s cooperation—unflinching though it may be—does not make the strongest case for plural protagonism in Chrono Trigger. Rather it is how the party—and even human nature—are diametric to the self-interest represented by Lavos.

Lavos is an alien parasite. That’s not a judgement, that’s what it is. It’s a creature of unknown origins soaring through space in absolute zero hibernation until it crash lands into a planet (it is not explained whether Lavos does this randomly like dandelion seeds blowing in the wind, hoping to eventually land on fertile soil, or by somehow propelling itself through space in an active search for a life bearing planet). It crashes into the volcanic soil at the equator of the planet in 65,000,000 BC. From the planet’s core, Lavos absorbs the planet’s life force for millennia, until it bursts out of the crust to jettison its offspring into space to repeat the process; it’s spawn that don’t escape the atmosphere fall back to the planet in a shower of nuclear fire, destroying most life and life-bearing infrastructure on the surface.

There are two things to take from that summary. The first is that Lavos is unnatural to the planet: Lavos came from outside the planet, the planet did not foster Lavos’s growth and it was unprepared for its intervention. Lavos does not belong. Second, Lavos is a parasite: its survival is dependent on the slow destruction of its host, Lavos becomes stronger as the planet becomes weaker and is, therefore, a self-interested creature. Lavos uses the planet and all the things living on and in it as a means to reproduce: an act that destroys both the planet and the creature itself.

Lavos, however, is not unnatural because it is a parasite, there are plenty of parasites and viruses in reality that procreate through the destruction of their hosts, what makes Lavos unnatural is that it is a parasite of such tremendous power that its existence is a paradox. When Lavos crashes into the planet, it creates two effects which ultimately lead to its undoing: it opens gates in time that drives the plot and it allows humans to use magic, which drives the battle mechanics. The amount of power needed by Lavos to break through the planet’s crust  cannot be so great that it destroys the planet—Lavos needs the planet to survive so it can harvest it—but it can’t be too small or it will not to be able to burrow into the planet and use it as a host. The only way for Lavos to thread that needle is to create gates and magic, the exact things needed to destroy it. 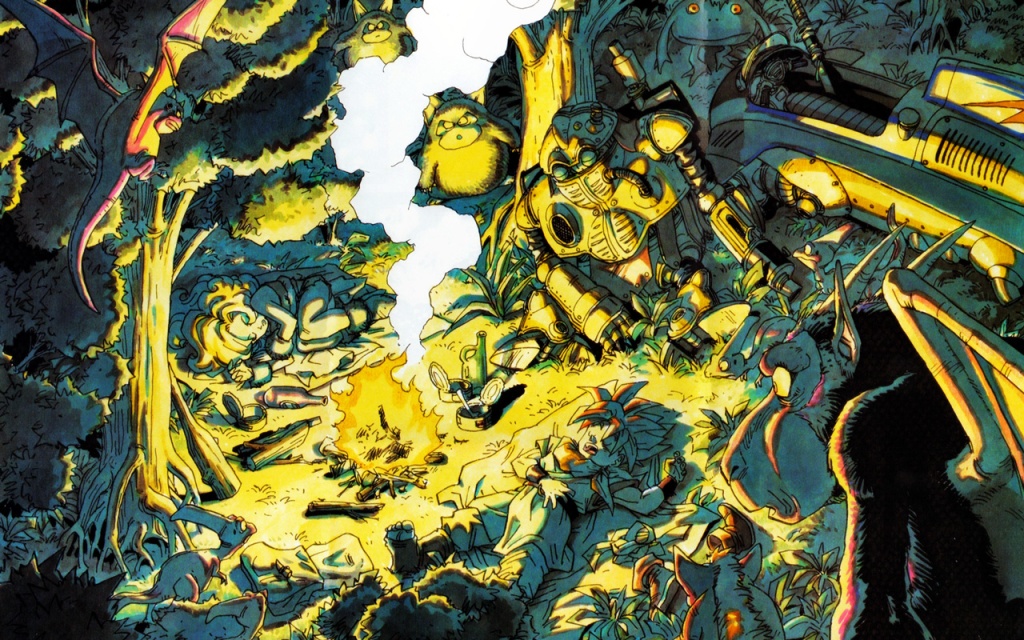 Moreover, the game frames the party’s journey as a natural reaction to an unnatural threat. Early in the game, teammate Marle is sucked into a time portal. The player controlled character, Crono, has only one possible reaction: to rescue her. Should Crono try to leave, his friend, Lucca will insist he stay. When Crono approaches Marle’s magic pendant, Lucca correctly assumes it is so that he can pursue and rescue Marle. The player can move Crono around and speak with other witnesses but ultimately Crono will make the choice—not through a cutscene, but through the player’s direction—to be the hero. Similarly when the party discovers Lavos, Crono is given the option to be a coward, but the game will not progress until he volunteers to save the world. Crono does not have it in him to not be the hero. The player and the party have no choice but to choose to be heroes. This is often criticised as depriving the player of freedom, but the game is not about the player; it’s about Crono, who has courage and virtue hard-wired into who he is. Similarly, Lavos is presented as a destructive parasite that is only capable of acting on behalf of itself.

Lavos’s selfishness is in its nature. However, as the game argues, selfishness is not natural to people, and people only become systematically self-interested when they discover or attempt to harness Lavos. Self-interest is personified as a monster and when people mimic the virtues of this monster they begin writing their own destruction: just as Lavos itself is destined to be destroyed by the very effects it has on the world. Self-interest is tantamount to self destruction. This is shown through the numerous antagonists—all leaders of their own civilization—who interfere with the party directly and intentionally. These antagonists, however, are only temporary and their counter-operations result only from their association with Lavos.

Every one of the organizations operating against the party have been corrupted by Lavos’s influence. Lavos appears to be the constant factor in all of these conflicts. Azala and the reptites worship the red star in the sky that is Lavos in pre-history, Queen Zeal draws power Lavos so her people can harness magic, demi-humans are manipulated by Magus, a wizard who means to summon Lavos and machines harvest the humans that Lavos left sick and starving after the apocalypse.

Not all of these peoples survive their proximity and imitation of Lavos. Azala’s reptites are buried by Lavos and the queendom of Zeal is set ablaze by when the queen momentarily awakens the creature. These civilizations are destroyed when their citizens worship or consume Lavos. That said, when Lavos disappears, the ruins of these civilizations are often able to recover by returning to their natural virtue of cooperation. The survivors of Zeal seek the forgiveness and cooperation of the once shunned earthbound and survive an ice age. Should the player defeat the demi-human generals in the year 600, the lingering hostility that marks the demi-humans in the year 1000 is replaced with a kindness and community with the world’s other kingdoms. Lavos, a figure of selfishness, is the constant that drives certain organized societies to conflict and, when it’s removed, people are able to behave in more altruistic ways, suggesting that, in a world without Lavos/selfishness, a more equitable and generous nature would emerge. Lavos is an unnatural interloper in Chrono Trigger and when people are able to distance themselves from its parasitic tendencies, they collaborate for a universal good. Naturally, this is clearest with the game’s main party. 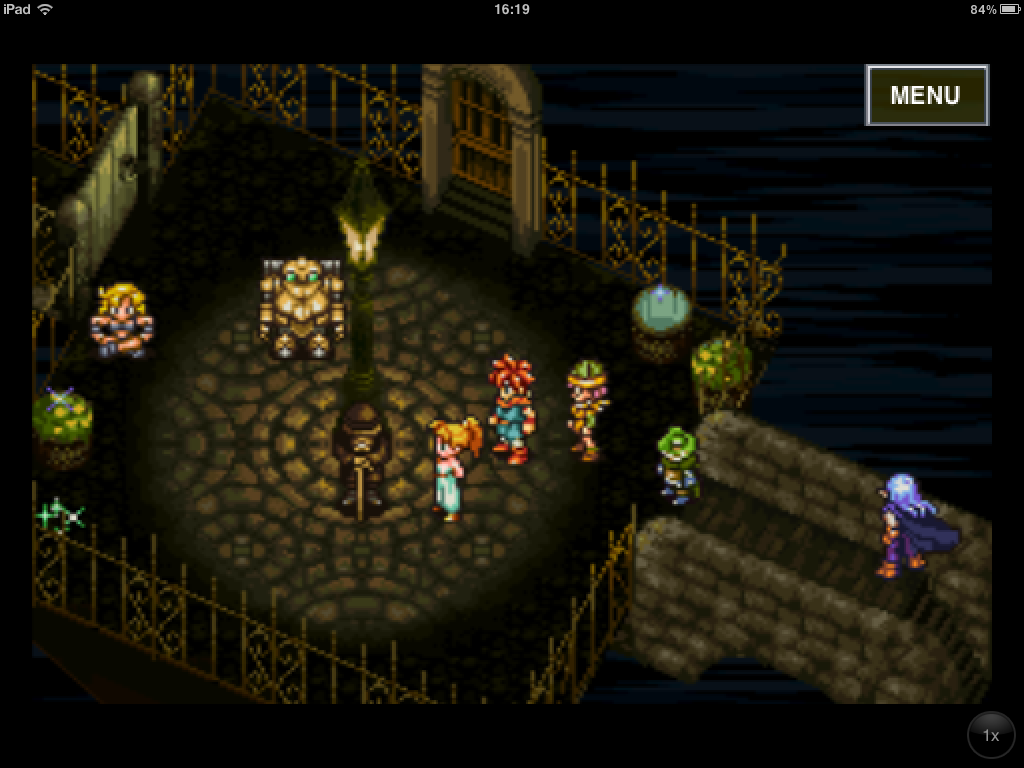 Chrono Trigger illustrates many other characteristics of plural protagonism discussed in other games in this series. Each stage of the game makes the inclusion of one particular party member mandatory, illustrating that the needs of an individual can only be met through cooperation. Beyond that, however, the game includes a personal sidequest for each party member in the game’s final stages. While these are optional, it’s important to note that each of these sidequests improves the conditions for large groups of people.

For instance, defeating the machines in the distant future not only saves humans from the robots, but it restores human emotion to surviving machines. Though the characters have a personal stake in their sidequests, their achievements create a universal good. The wrongs in the world that the player seeks to right are those caused by selfishness. Everything that improves the party’s capability against the grand threat ca only be achieved by improving the communal living conditions. The player may only gain the rainbow shell armour (the best in the game) by deposing the Machiavellian Councillor responsible for an autocratic prison policy. To acquire Lucca’s best weapon in the game, the player must go back in time to teach a greedy mayor’s ancestors the value of generosity (incidentally changing that same mayor from a bad father to a good one). Every objective, required or optional, has the party acting for the benefit of a group. 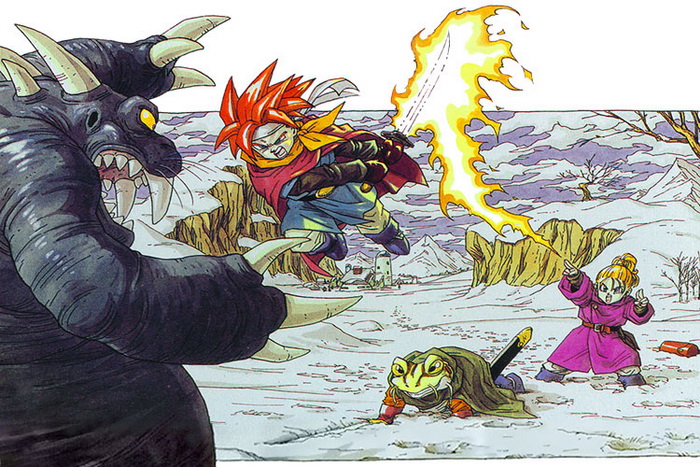 Team cooperation, of course, is also visible in the aspects of play. Each member of the team controls magic of a certain element and varying enemy weaknesses demand that different party members team up at different times. Team members can be rotated in and out at any time outside of combat, often preventing some of the lengthier dungeons from wearing the team down. Furthermore, the then novel combo tech system allowed each team member three “double-techniques” with every other team member and a “triple-tech” for many combinations of trios. Every member will eventually be able to combine their unique skills with every other member. This not only makes the team exponentially more effective, but it indicates an equity and a collaborative spirit between members. The team is mechanically tied to one another, and party coordination is central to the often lengthy and difficult boss battles. Moreover, almost every boss is a solo enemy, which again pits the powerful individual’s interests against the community’s.

Chrono Trigger paints a resolutely hopeful picture of human nature. JRPGs place considerable value on cooperation but many treat it as virtue to strive for, not an aspect natural to the human psyche. Human beings, according to Chrono Trigger, are inclined to act together for the greatest mutual benefit. The enemy of the game is an avatar of selfishness, a creature that—just by existing—is in doomed conflict with the principles of cooperative people. The closer people become to their selfishness, the more danger they put themselves in. In Chrono Trigger, the player must be the hero and they must work for the interests of the many. Chrono Trigger is unabashedly optimistic, perhaps naively so, but if nothing else, it  demonstrates its case for cooperation through its text and its systems of play.