’s release in 1997, Cloud Strife is still an exceptionally multifaceted character. Of course, there is no one true measure of quality of characters (in games or otherwise) but at the very least, Cloud is one of the rare characters in games with depth, complexity, and a smooth, believable arc of character development.

The first time that the player sees Cloud, he’s vaulting out of a train and single-handedly dispatching a group of armed guards. He’s detached and impersonal, a sword for hire whose only priority is completing his job and getting paid. Cloud is set up as a masculine power fantasy. He’s an elite military specialist gone rogue against an oppressive corporatocracy motivated not just by rugged individualism but also to protect the women that he encounters. He reacts to crisis with an aloof swish of his hair and a cocky slouch. For the first half of Final Fantasy VII

, the player takes the role of this capable, slightly arrogant warrior figure. 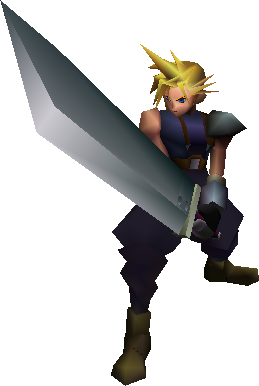 Most video game heroes resemble Cloud after the opening credits. They are outlets of the same male power fantasy. But halfway through the game, layers of Cloud’s facade are peeled away. When he demands that Aeris or Tifa stay out of danger, he’s incapable of holding them back—and indeed both women prove as necessary to the quest as they are competent in the face of danger. Secondly, Cloud is not hunting down the villainous Sephiroth, he is being led by him.

Cloud is not only less capable than he lets on, but his entire identity is false. The major reveal of Final Fantasy VII

is that Cloud falsified his own memories. He was never a member of the elite military group Soldier, he did not become personal friends with the war hero Sephiroth, and he never made a living as a mercenary. In truth, Cloud was raised by a single mother, he had a lonely childhood, he failed to live up to his dreams, and he’s terrified of being alone. His entire background is mired with so much failure and disappointment that he represses it totally and adopts a new identity.

Cloud’s personality is based off two templates: that of Sephiroth and that of Zack. Sephiroth is set up as a militaristic ubermensch, a famed war hero. Similarly, Zack is a young wunderkind rocketing through the ranks of Soldier, a talented and respected man with the bright future that Cloud wants but is incapable of achieving. The 14-year old Cloud boasts proudly to a young Tifa that he’s leaving for the big city to join Soldier and be like Sephiroth. Cloud adopts Sephiroth as a fatherly paragon of manhood and Zach as a standard of manhood he can never achieve. Both of Cloud’s heroes are appropriately armed with signature phallic swords. When Cloud takes on Zack’s identity, he takes his sword (which in battle he holds upright between his legs) and buries his preteen self beneath this other man’s identity.

At the game’s halfway mark, after the party acquires the black materia in the Temple of the Ancients, Cloud’s mind betrays him. He lacks the will to resist Sephiroth, his father figure, and turns on Aeris. At this point Cloud is no longer the cocky, dispassionate warrior. He’s as likely to curl into a ball and pout as he is to charge into battle. The more of his false identity that is peeled away, the less there is that remains. Cloud’s self is so dependent on the virile masculine warrior illusion that there is nothing beneath it. When his illusion is stripped away entirely, Cloud is paralyzed and catatonic. Cloud’s only self is the fantasized version that he created.

comes to a conclusion, a whole and real Cloud finally emerges. Cloud accepts his failures, he apologizes ad nauseum for being weak, for failing himself and the rest of the party. However he’s still accepted back, and they don’t hesitate to forgive him. He acknowledges his flaws and overcomes them. His personal acceptance is rewarded when his friends accept him. He isn’t very masculine, but his peers still respect him. The Cloud at the beginning of Final Fantasy VII

is starkly different than the Cloud at the end. He whines, he fails, and he is weak, but he is far better equipped to save the world than when he was deceiving himself.

By the end of the game, the government it toppled, the planet’s energy source is too dangerous to keep using, the world’s largest city is destroyed, but the planet still stands and there is still hope. The theme is echoed in Cloud’s progress as a character, for all his self-deception, his mistakes, and his weaknesses, he finds himself and ends up stronger after doing so.

Videogames seldom star such deeply flawed characters. Only L.A. Noire’s Cole Phelps is as flawed as Cloud and even his redemption is never complete. Most often player’s take on roles like Marcus Fenix, for whom being exposed means removing a hat and having a woman jump to tend to him.

Cloud is alone, he is afraid, and he doesn’t know who he is, a sentiment shared by many 21-year-olds, even those who aren’t burdened with saving the world. As the story concludes, after the “real” cloud is rescued literally from deep within his psyche, he becomes a complete human being. He’s weak, and he’s sorry. He’ll do better next time. He may never be the ubermensch that Sephiroth is, but people like that are dangerous and unstable. Cloud’s personal journey is ultimately one of self acceptance: as involved as Final Fantasy VII

is in environmental, capitalist and existential narratives, the thrust of its themes are carried by Cloud’s inner journey.