Life is slow moving and mundane, games aren’t. Therefore, games satisfy a need for speedy, direct progress. It’s difficult to point to when the idea that games exist for the sake of escapism was popularized, but in recent years, such an idea has driven much of games journalism and probably a good deal of design as well. It’s odd to think of such an expensive hobby that is so often associated with a privileged class as designed purely for escape. What could such an audience have to escape from?

, however, rejects the idea of games merely existing as a form of escapism. The game acknowledges the idea that many have that games are escapist and refutes it.  It’s a game about gamers and the dangers of escaping into gaming too deeply. The thesis of Final Fantasy Tactics Advance

is that escapism is not just dangerous to the medium but to those of us that love it.

begins as a timid new student named Marche (whose father has just walked out on his family) meets the game’s cast: the bullied Mewt, whose alcoholic father is a drunk and whose mother has recently died; Ritz, a tomboyish misfit with an illness that whitens her hair; and Doned, Marche’s quadriplegic younger brother. After school, the kids meet to read a mysterious book that Mewt found. While reviewing the apparently ancient text, the group discuss their experience with books, which turns into a talk about their common love of games, specifically the Final Fantasy series. The book reacts to their conversation and that night Marche awakes in the world of Ivalice, a world based on Final Fantasy (and one used numerous times in the series and its spinoffs). 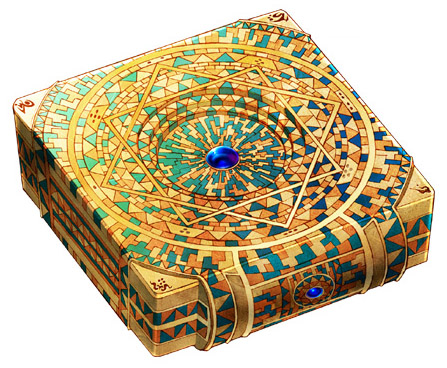 Marche and company have a lot that they want to escape from; they’re disenfranchised, suffer from parental or physical irregularities, and beyond their close circle, they have few people that both care about and understand them. The Final Fantasy games are a way for these disempowered pre-teens to feel effective and loved. When the kids are playing Final Fantasy, their objectives are clear and achievable, they have the power and justification to change their surroundings, and their efforts are appreciated. The worlds that they experience in games are opposite to the world of high school. They use the Final Fantasy series as a way to escape their difficult lives. When the kids in Final Fantasy Tactics Advance

Their town shifts into a whole new world filled with the delightful clichés of the cartridge era. The characters become the video game heroes that they dream of being. Ritz’s sickly white hair is replaced with vivid red locks and her tenacity makes her the perfect leader of her own meandering war band. Doned can walk for the first time and becomes a powerful, respected mage. Mewt’s father is no longer a drunk begging for extensions on his loans, rather he’s a powerful legislator and his mother is alive as the realm’s queen. Even Marche, who from the moment that he arrives in Ivalice seeks a way home, admits to having fun and feeling happier in this escapist world.

The plot continues with fairy tale predictability—which is probably for the best, complicating the plot much more would dilute its effect—as one by one the characters realize that their time in the game must come to an end. They may remember the experiences of the game world and retain what they’ve learned there, but they can’t stay. Everyone but Mewt comes to this realization. The closer that the party gets to unraveling the world and going home, the more that Mewt abuses his parent’s administrative power in this fantastic world to stop Marche. 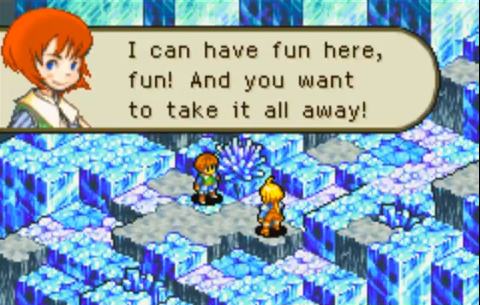 Mewt, the character faced with the harshest reality, is understandably the least willing to return to it. He turns on his friends, he throws more barriers in their way, and he commissions more henchmen to hunt them down. His escape from his real-world problems makes him incapable of dealing with them. As he digs deeper into the game, he transforms from a shy, misunderstood kid into a whiny, spoiled, and entitled brat whose behavior can no longer be justified. He consciously attacks his friends for trying to bring him out of the game and back into reality. These characters love Final Fantasy, it shapes who they are, but Mewt’s metamorphosis is darkest because he loses a sense of the distinction between reality and the game.

No matter how much we may love games or how much they shape the way that we think about the world, there remains the nagging reminder of all the embarrassments that games are held responsible for (whether justly or not). We all know “that guy” that quits his job to reach 400,000 gamerpoints or that spews hate speech after losing a multiplayer match, or stops talking to his friends because he doesn’t want to cut into too much of his WoW time. Mewt becomes “that guy” in Final Fantasy Tactics Advance

he escapes the real world so effectively that reality escapes him. Final Fantasy Tactics Advance

is a game that is about a medium that is too often used to escape rather than to understand the real world.

is an often overlooked gem in gaming’s recent history, possibly because it was a relatively minor release for the Game Boy Advance

during a brief time when Nintendo was not the dominant force in the industry that it traditionally has been. But it stands out as a courageous title at the very least. It’s willing to scrutinize itself and its own history. It’s a game that enlightens players about what consuming games can mean if they’re allowed to become a real escape for their players.

One thought on “Anti-Escapism in Final Fantasy Tactics Advance”