Fighting games are the old video game aristocracy. Once they were mighty rulers that had enormous influence on the medium’s direction. but after years of inbreeding to keep the bloodline pure, there remain only a few disfigured vestiges desperately trying to stay relevant in a world that has been perfectly content without them. Tortured metaphors aside, few fighting games are based on a franchise under ten years old anymore. Fighting games without any “good ol’ days” to look back on feel silly compared to the epic 30 hour quests or deep and immersive games of today. By comparison to most genres, the average fighter quickly boils down to two beef slabs in lingerie button mashing each other’s health bars down. But for those who recall the arcade cabinet and the early days of consoles, there will always be a special place for fighters like Mortal Kombat

—even if it isn’t entirely deserved.

For the few fighting games released every year, nostalgia seems to be enough to earn a passing grade, and Mortal Kombat Komplete

seems bent on pushing that advantage as far as it can go. The latest installment brings the series back to its roots in a decidedly comic book-esque fashion. After the events of 2006’s Mortal Kombat: Armageddon

(apparently overwriting the mythology of Mortal Kombat vs DC Universe

, to nobody’s chagrin), the entire cast has been killed save for Shao Khan and a wounded Raiden. But before he’s defeated, Raiden sends a message back to his past self, just before the events of the first game. 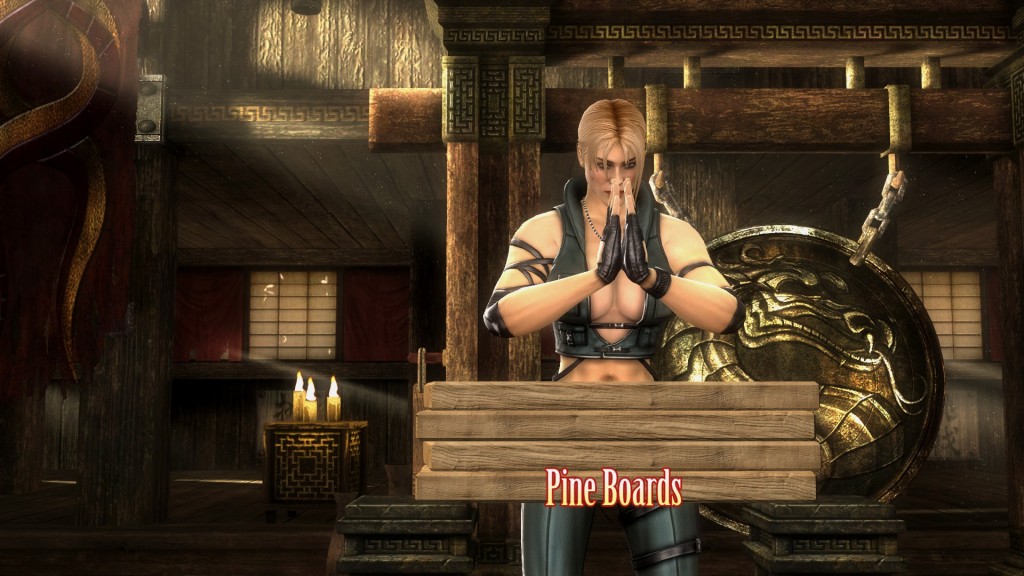 The game takes about eight hours to get through all the events of the first, second, and third Mortal Kombat

games, in which Raiden’s premonition allows him to influence events. Some characters have their allegiances switched, playing different roles than they did in the original timeline. The writing and acting is on par with most kung fu dubs, and it fits nicely in the “so corny, it’s enjoyable” niche that Mortal Kombat

Even in spite of this campiness, the characters hold a certain charm for players familiar with the series and the plot proves surprisingly compelling. There’s a particularly well-done sequence when controlling Scorpion that is told through ink-painting, and an overarching sense of inevitable destruction across the campaign is surprisingly effectively evoked. For a story that’s always been about ninjas in colour-themed pyjamas throwing fireballs at each other, the campaign goes above and beyond expectation.

Of course, one can’t talk about Mortal Kombat without at least mentioning the violence. This is the franchise that made the ESRB necessary, after all. Even before the player gets to the fatalities, there’s plenty of red fluid splattering across the stage after each successful punch. Since the move to 3D, the Mortal Kombat games have traded the speed and style of other fighters for a slower, more brutal feel. Every time that a character landed a punch in Mortal Kombat: Deception

, it looked like it hurt. That isn’t the case with the latest installment. Blood is thick and bright red, more like globs of strawberry jam flung across the screen than something from an actual injury.

The hyper-sexualization of the characters is similarly numbing. Liu Kang’s previously slender and lithe design has been traded for a comedically bulky one and all of the female characters look more like a pair of tennis balls glued to an ice cream cone than actual people. Anatomy is so caricatured that these characters stop looking human and one wonders if the character model designers have finally given up and dissolved into self-parody. The fights look and play more like slapping dolls together than real combatants trying to outmaneuver and overpower one another.

However, the story and aesthetics are only an added bonus for the real draw of the game: the multiplayer. A fighting game sinks or swims based on how well it can be enjoyed by a group of friends in an altered state of consciousness. The updated mechanics take some getting used to. Tag team fights make the game playable for up to four at a time, which is a welcome addition, but some of the moves involving a partner are unintuitive and take too much practice to dive right into. The new X-Ray abilities, Mortal Kombat

’s answer to Street Fighter’s super combos, also break up the flow of combat in a way that old-school players may dislike.

The “Komplete” edition includes several skins, which are always nice but add nothing to play and also four new characters. Freddy Krueger of Nightmare on Elm Street fame makes about as much sense as Darth Vader in Soul Calibur, for whatever that’s worth, Kenshi returns as the only post-16-bit character other than Quan Chi to be worth bringing back, and Scarlet and Rain, mere palette swaps from Mortal Kombat Trilogy

. It also comes with a code to download the 1995 film, which is just as much a delightful reflection of yesteryear’s schlock. Otherwise it’s the same game that was released in mid-2011 with a few small additions.

It’s not a bad game, even if it does fall into the same rut that fighting games have been digging themselves into for over a decade. Its campaign is solid, its mechanics work beautifully, and if the skill disparity isn’t too big, then it has every right to be the go-to social activity for a group of friends with a Saturday to kill. The future may not always seem clear for games like Mortal Kombat