Last month, Bioware officially announced that they will be releasing Dragon Age 3: Inquisition. The mix of life-like feudal politics with high fantasy tropes seems to have created the series that keeps on giving, which Bioware no doubt intends to keep up with. Dragon Age is one of the better narrative experiences in games of the last decade and continuing with what has become a recognizable series is only sensible on a fiscal level. There are still several areas of the game’s continent of Thedas still to be explored, to say nothing of the many characters with as yet unresolved plots. But without speculating too much over some preliminary announcements, now is as good a time as any to review where the series has been.

Dragon Age: Origins featured about as pared down a plot as one can get. Once every few centuries, creatures called darkspawn amass and rise from beneath the earth to conquer the surface in what is known as the Blight. Only an order known as the Grey Wardens is able to stop the Blight. The player controls a new Grey Warden recruit and is tasked with stopping the blight. That’s it. Ultimately, there is never any question of where the player stands or what they need to do: all paths lead to ending the Blight. It’s Tolkien’s orcs attacking Middle Earth. But unlike Tolkien’s universe, Dragon Age: Origins took place in a world unchecked by fate. Royalty was not always good, usurpers weren’t always bad, curses were justified and war was not glorious.

Every location visited, every sidequest undertaken, and every conversation carried out would somehow inch the Warden closer to her unambiguous goal. Still, even with the Blight’s inevitable end, there was an overarching sense that the world of Thedas was going through a permanent change. Everything the warden went through would have an impact on the world even after the Blight ended. Where Lord of the Rings ends with a new age ruled by the rightful king, Ferelden would bear the scars of the Blight forever. Origin’s journey was wide in scope and the consequences of victory were unpredictable and far reaching. There never seemed to be a “right” way to play it. Bioware’s other major release of the decade, Mass Effect, always gave the player a way out. Until the third and final game, the player almost always got what they wanted and Sheperd was always given a chance to be the uncompromising hero or the lone gunslinger willing to do the right thing no matter the cost. There is a romance to Mass Effect that doesn’t exist in its fantasy counterpart. Dragon Age was infinitely murkier, and the Warden never rose all the way to heroism or stooped all the way to villainy to stop the Blight.

The morality system of Dragon Age was probably the best of any Bioware game to that point. Instead of building points in either a paladin or badass category, the warden had to earn the admiration of each individual teammate. The warden had to learn the moral and philosophical code that each of her companions lived by and act—whether genuinely or not—according to each ally’s relative morality. The warden could agree with an ally’s outlook, defy it, try to change it, or ignore it, but she was always being judged by the fallible people closest to her, not by a cold and objective “light/dark” side. If a friend had a problem with the warden, she could prevaricate to earn their cooperation or insult their sensibilities and hope that they would get over it later on. This forced the player to create a character based not on what they thought the good guy or bad guy would do but based on how the game’s cast might react. And the widely different personalities of the varied characters ensured that somebody would always eventually take issue with the Warden.

It made the story as personal as it was grand. Even as the world was at stake, the player was making friends and experiencing a fantastic—if familiar—world from multiple perspectives. Entire plot threads could be created or altered by a single line of dialogue. The goal was simple and unchanging, but with so many paths to reach it, the warden couldn’t help but become a fleshed out character of her own. The interaction between the Warden’s various origin stories with her decisions up to a given point forced her to come to life and to take on a role of her own. The player could not sit back and choose the paragon option every time and expect the “good” ending.

On the surface it was a straightforward Dungeons & Dragons affair. It was a love letter to the RPGs of old with a glossier coat of paint. But it’s the details underneath that made the game stand out. Origins is tightly packed with all of the clichés of the fantasy genre, its cast come from the same template that has pressed every Bioware cast, and the mechanics were the tried and true western RPG fare that have changed little in the last twenty years. But the emphasis on role-playing, the consistency of tone, the lively characters, and the grandiose world packed with incredible details all made Origins a very strong game.

But, as the title might imply, Dragon Age: Origins was meant to be an origin story. From the title screen itself, the implication is clear that all of this is leading up to something. It should have been obvious that Bioware had no intention of leaving such a fleshed out world in its backlog (it’s a wonder that they’ve done just that with Jade Empire). Dragon Age II divided players in a way that no game would until Mass Effect 3. Though, even with the controversy surrounding Mass Effect 3, it was only the ending that divided its fans. Everything before it seems to be unanimously appreciated. Dragon Age II was both the game of the year and the first horseman heralding Bioware’s apocalypse. Personally, I have never held such ambivalent views toward a game. 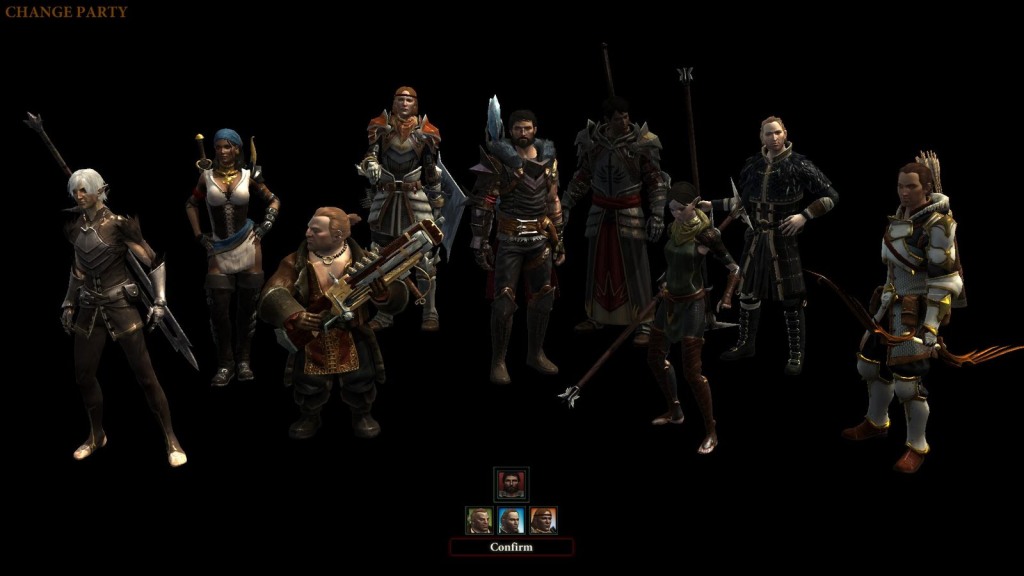 My own feelings on Dragon Age II are best summarized in Kris Ligman’s review: “It’s fantastic, and it’s horrible. It’s brilliant, and it’s ridiculous. This is the best thing I’ve ever played. I want my money back.” (“Dragon Age II: Making the Case for “Quality” Games.” PopMatters. Mar 21 2011). The plot is a disorganized mess even as the world becomes deeper and more complicated. The choices that the player makes have no meaningful consequence but the powerlessness just reemphasizes the thesis of the text. The characters are some of the most human ever written, even while some refuse to be likable or even relatable. The mechanics are more streamlined and accessible than ever, even as they’re mired with lazy and obnoxious design choices.

All the little details that made up the grand world of Origins were replaced with a small, unchanging, and shallow world where a deeply personal—if disjointed—story was told. This game wasn’t about the last hope for the world; it was the story of a small group of people that (accidentally) put a revolution in place. Gone are the plethora of conversation options that put the player into a unique role of his or her own, now the player controlled Hawke, who fit into the role of paragon, renegade, or indecisive smartass when either of the other two extremes didn’t seem to fit. Hawke didn’t shape the world the way that the warden did, in fact, Hawke was just a set piece being swept up in all the other changes that the player had no control over. Unlike the warden, Hawke did not have several possible personalities. Hawke was just a bystander that benefited from the cultural hegemony. No matter what the player’s choice, Hawke would become wealthy, celebrated, and greatly respected, Hawke would be given extraordinary political influence, and everyone would agree that he deserved his laurels and none of that would mean a damn before the credits ended.

Dragon Age II was the narrative opposite of its predecessor in many ways. But, for the most part, it worked. The kind of almost ominously linear storytelling that Dragon Age II made use of is not conventional for western RPGs, and it certainly isn’t in vogue now. But the game deserves to be commended for how it courageously tackled social marginalization in a believable and morally bankrupt world. The game made the protagonist helpless while telling the player how important he is. It made likable people sinister and total monsters understandable. It made a world fall apart while scarcely altering the status quo.

The supporting cast refused to tow the line. There was no Blight forcing them to put their differences aside. Instead, their differences defined them. The new “morality system” changed a step further, too. Now, the protagonist could be either a friend or a rival with an ally, but he could never compromise. Hawke could earn his companions’ respect as a kindred spirit or a worthy adversary, but never as both. Hawke was as powerless in this as he was in everything else. He could not get everybody to like him.

There was no way Dragon Age II could have done the things that it had if morality were more clearly defined and the player had more control over the plot in the way that they did in Origins. The less forgivable aspects of the game—the recycled locations and the infuriating length and monotony of the combat—are probably more a result of Bioware being stretched too thin during the development of Mass Effect 3 andThe Old Republic. It excuses nothing, but at least the mechanics are unlikely to be as sloppy next time around.

Even so, the game took many more risks than its predecessor, and it was a decisive break from the hero’s journey that Bioware has leaned on for just about every other game in its library. It was almost defiantly reckless, designed to succeed not just in spite of the boundaries around games but because of its attack against them. It may not have been the first chapter in a new epic as it was planned, but its bravado in the issues it tackled guarantees its place in history.

In light of the games that have led up to it, Dragon Age 3 faces an embarrassment of riches. Origins set up a huge world of possibilities, it established a world barrelling toward a new age with dozens of factions, all with justifiable interests, clawing over each other for supremacy. Dragon Age II showed us exactly what kind of story this world is going to tell. It abandoned the safety of its predecessor and sought to truly challenge its audience. Dragon Age 3 could follow in the steps of either, or it could go its own completely different direction. In any case, the series has shown some incredible growth in a very short time, and if the third one does fail, let it not be said that it was due to lack of potential.