[Spoilers for the first 15 hours of Expeditions Conquistador. For a more focused look at the game read my review or my follow-up article on PopMatters]

Okay. Expeditions Conquistador, eh? Why do I get the feeling I’m walking into a real quagmire?

Starting menu music’s pretty. Here we go: new game. I can be a woman? And half the starting cast are women too? Without any gendered buffs or penalties? That’s a positive start. The pool of my potential starting crew each have their own bios too. That’ll make for some cool role-playing. I wonder if any of this will come back or if it’s just window dressing. Either way, pretty cool.

The opening cutscene seems to be a journal entry from a random crew member. I guess I’m a pretty okay gal by the sounds of it. I’m the only child of a lower noble family sent to find glory in the New World.

So the governor of Hispaniola has taken my ship and docked me before I could reach the New World. Time to tutorialize. Wow, that was cool. Really simple but elegant combat system filled with meaningful strategy. I’m impressed.

It looks like one of my soldiers was injured. That can’t be a big deal though. Alright, governor is pretty standard RPG gatekeeper fair. Yup, “I’m king here,” “rebel forces,” “get your ship back if you complete my quests,” sounds right.

WHAT? Did this game offer me slaves? Like, actual slaves that were kidnapped from Africa after the native slaves had been worked to death? Holy hell does that leave a bad taste in my mouth! Thank god it gives me the option to take paid servants. But this game seriously lets me simulate slave-owning. Just having the option is disgusting.

New party member: Isabela, a soldier and the mestizo daughter of a Taíno woman and a Spanish noble. It’s just occurring to me now that I don’t have anyone in my team that can speak with the natives. Kinda makes me wish somebody had thought of this before leaving Spain… 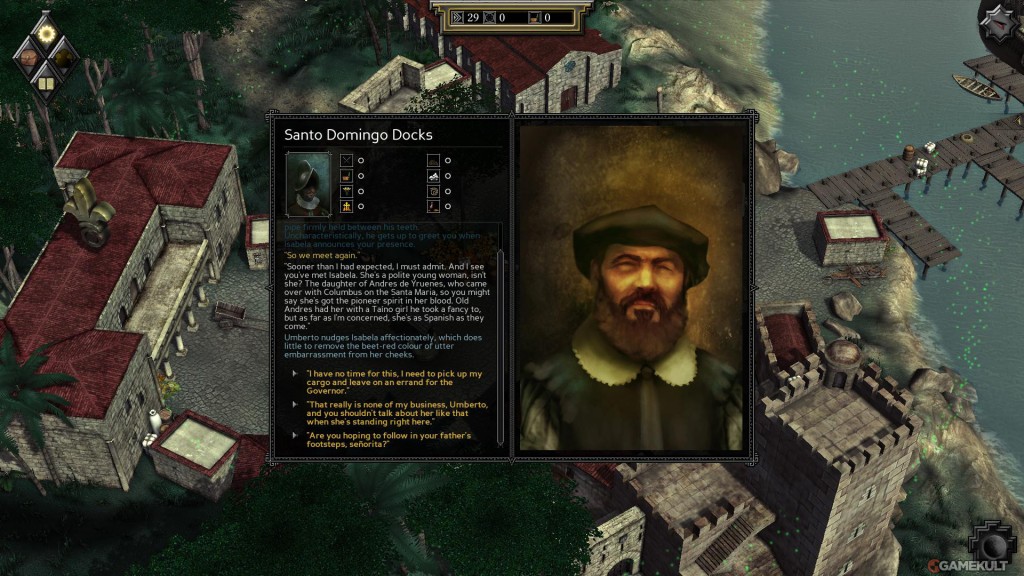 Ok, Governor Asshat needs me to chase off some natives from a nearby temple. Okay game, this is your chance to prove that I’m not just playing “Racism Tactics.” Good, I can leave them to their worship and let them leave on their own terms. I guess that wasn’t bad. Wait. Now a member from my crew is getting uppity. Well you can shut up. Pious members have lost morale!? C’mon!

So that soldier that was injured in the tutorial is still injured. I’ll assign a doctor to heal her. Aaaaaand it took almost all my medicine and I couldn’t even stabilize her.

There are two leaders of the Spanish rebellion, Esteban and somebody a Captain named Lilandra has been fighting. I’ll go wander around for a bit. The soldier from the tutorial still hasn’t fully recovered and I’m almost out of medicine.

Down goes my injured soldier. Everybody loses morale. I can perform a brief memorial in her honour. That mitigates some of the damage to morale.

Without that soldier I don’t think I can guard my camp all that well. All my rations keep disappearing over night. Now I can’t feed my troops. And now they’re losing morale. Maybe I should recover an earlier save.

Alright, I’ve  restored an earlier point in the game and spent all my stupid worthless gold on sweet blessed medicine. The soldier is back. So now I just have to never, ever let anybody get injured again. That can’t be too hard.

I found an injured Spaniard. Attacked by the natives, eh? Well that sucks. No I will not go after them, the whole expedition went to hell the last time somebody got hurt. Oh yeah, and ethics. Did I just put the well-being of my invaders ahead of the sovereignty of the natives? Now my goddamn doctor’s starting to pipe up against me. Yeah, lose morale, see if I care…please don’t leave me.

A native village. I wonder if I can trade with them. Hammer out the details, Isabela. What do you mean they won’t talk to a half-breed? They’re attacking, you say?

Well I got good and murdered there. Let’s try again. Sit this one out, Isabela, I’ll talk to them. Okay, that went better. Trade away. Gold isn’t worth much to you compared with food, medicine and tools, eh? I can relate.

There’s Lilandra’s town. Wow! She’s a total badass. Go to the mountains? okay. Nice mountains, I guess. And now I’m being ambushed by the Spanish rebels. Can I talk my way out of this fight? Okay, I can, but only by appealing to our common race. Well if that’s the only way to make nice with these guys maybe I shouldn’t bother. Then again, I’m still nervous over the last time I got into a fight.

Well that was tough as all get-out but I did it. Lilandra’s the bad guy, she’s the leader of the rebellion against Governor Asshat. And she’s an abolitionist. Well this is awkward.

Ah, there’s another native village. They seem much more responsive than the last. There’s a shaman named Atl. He speaks Spanish. He’s actually pretty funny. He has a very witty and sarcastic sense of humour. I’m glad Logic Artists didn’t lean on stereotypes for the first native member to talk to me at length. He wants help tracking down  special kind of medicine. Come along then, happy to have you here. Now I have another bi-lingual party-member. Hmmm, I’ve noticed that even though everyone on my team has personalities that keep cropping up in the random and prewritten events I keep reducing them to their utilitarian value.

There’s Esteban, also working with the natives. I keep getting the feeling I’m serving the wrong force. Esteban only wants to fight. Down he goes, time for some post combat info pumping. His troops are fighting against Lilandra’s troops? Off he goes, escaping deeper into the jungle.

I’m not more than a few steps from Esteban’s next encampment and I’ve bumped into a Carib scouting band. Well I’ll just explain that there’s no need to fight. Not enough diplomacy? Crap, but…

Yes! Really starting to see my team toughen up. I ripped right through those guys! That small group from a tribe I know nothing about patrolling their own land. I really tore them down with ruthless efficiency. Ugh. 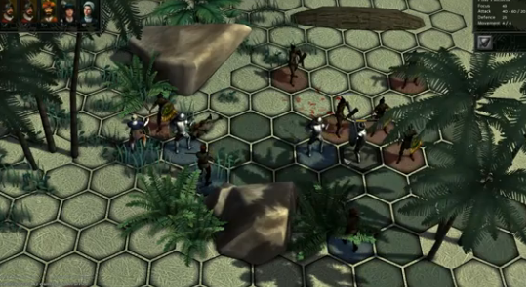 There’s Esteban again. I can set up an ambush, well I’ll get my team in position first and try to talk things out. He’s just not listening to me. Fine, let’s take him down. There goes the last of his troop and he’s run off again. Well at least half of the rebellion is dealt with. Now I just need to figure out what to do about Lilandra.

Halfway back to town and Esteban has snuck into my camp, beat up one of my scouts and kidnapped Isabela. He’s making way for a Carib sacrificial altar. He’s going to trade Isabela for a new batch of troops to carry out his rebellion. I have 14 in-game days to rescue her. Off I go.

I’ve reached the altar and the natives have beaten the crap out of Isabela. Esteban appears to be falling apart over what he’s doing. Maybe there’s a conscience in there after all. In I go. Esteban’s itching to fight some more. Isabela takes a knife from her boot, jabs him and runs away. Time to finish him off.

Esteban asked me why I’m here. Come to think of it, a lot of people have asked me that. The governor did, the captain of the Spanish guard did, Lilandra did, Atl and Isabela did. Why am I here? I mean, ostensibly, I’m here to bring glory and fame to my family. But how? Isn’t that up to me as the player? I can say I’m here just to learn and explore but I know that isn’t true. Half the things I do in the attempt to learn or explore either get me or a dozen other people killed. What am I doing here? Why do I keep playing this game? I know how this will end, It’ll end with the South American aboriginals slaughtered and African slaves taken from their homes and laboured to death without pay for three-hundred years. In the end all I’ll have done is help set up a military-industrial complex that blows up globally until the air and the water is poison and everybody in the overpopulated world is terrified of one another. But I keep playing and trying to make this better. What am I doing and why am I so nervous? 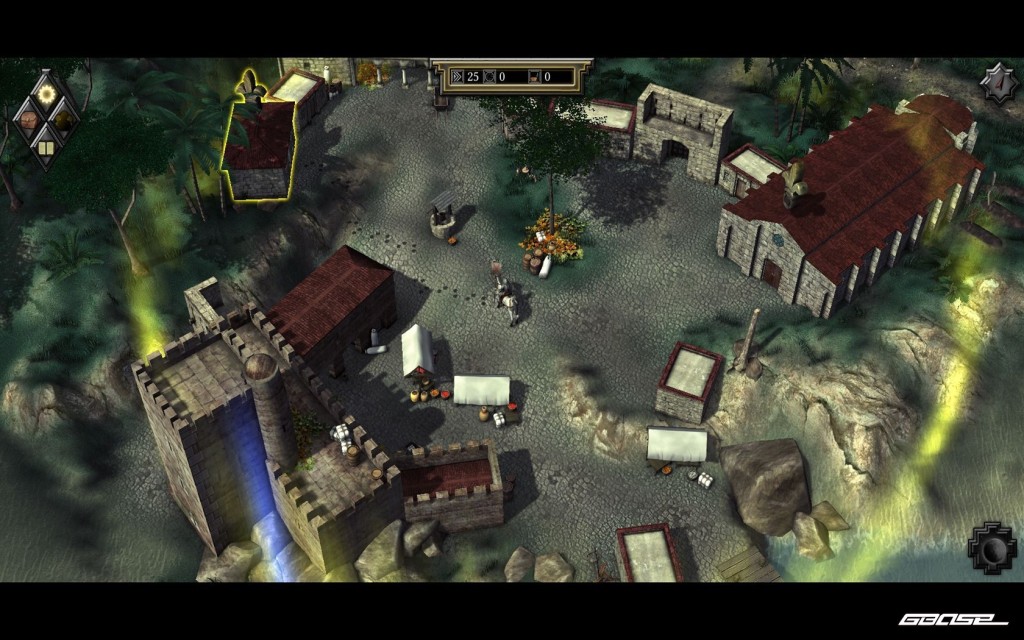 I’ve beaten Esteban. Now that he’s a heap of broken bones and lacerations he’s finally taking the time to hear me out. He’s trying to fight Lilandra because she used him. She’s not interested in freeing the slaves or liberating the natives. She wants to overthrow the governor so she can usurp him and earn more money and have a fancy title. I can spare Esteban. I wish the moron would have taken the time to explain himself before all of this but I need more competent soldiers and he does have a working relationship with some of the natives. I guess he can come along.

Sparing Esteban has “traumatized” Isabela, permanently changing her personality and how she reacts to what I do.

Back at the colony, Lilandra has begun her attack. I fight her first wave off successfully. Yay me, I guess. 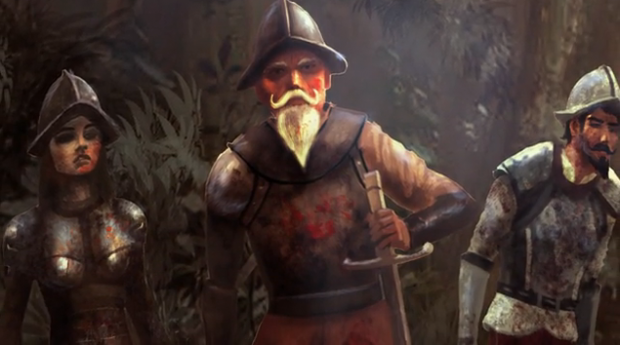 Lilandra reveals a tidbit of Isabela’s past: she was adopted by her nobleman father. Her real father was just some random Spaniard that may or may not have raped her mother. Isabela was raised by her father as a “curiosity” as Lilandra puts it. I can forgive Isabela for lying about her past, tell her to leave or kill her. I can kill her for lying about the circumstances around her birth and childhood. You’re actually giving me the option to kill her? Uuugh…

Lilandra’s dealt with. Governor Asshat has given me my ship back and his blessing to continue to the mainland. I can’t believe this guy turned out to be the least shitty option.

Atl tells me that he’s needed too much in his home village to continue in my journey. I’ll try to convince him to stay. Nope, his duty is back at his home. I can make him stay against his will? Why would I want to do that after what he’s done for me? Then again, why wouldn’t the game give me the opportunity to enslave a peaceful aboriginal who’s only ever been helpful?

That’s it. Press preview is done. And here I am back at the starting menu that promises that I can rewrite history.

Further reading: Adam. “Perspectives on Patriotism, the Fourth of July, and Our Game, Courtesy of Conquest of the New World.” Un-Original Thoughts I’m Having. July 4 2013.

8 thoughts on “My Thoughts While Playing Expeditions Conquistador”