There are some things I wanted to say about Exit Fate that got left behind when I wrote about it and then wrote about it again and kinda wrote about it that one other time (“The Perspective of Privilege.” The Border House. May 1 2013; “On the Difference Between ‘J’ and ‘W’.” bigtallwords. May 5 2013; “Plural Protagonism Part 3: The Shining Force.” bigtallwords.) For one, in all that I’ve written about it in the last month, I failed to say that it’s good, that you should play it and that you should consider giving the creator a donation if you’re able. For another (and this is the real reason for the post), there’s some issue around how the game interacts with is source material that has put some people off. To wit, the game lifts some of its content (particularly music) from other games. 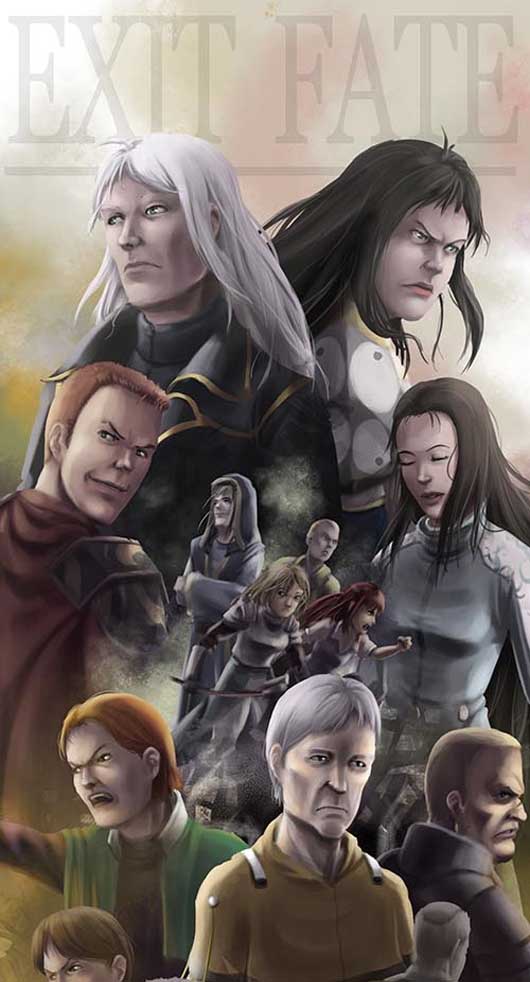 For starters, I understand that copyright is in place to protect people’s ideas from being stolen: that’s important, sure, but SCF, the game’s designer, isn’t stealing. I don’t know much about private and public domain and what constitutes the difference but I’m not even going to bother with a Wikipedia search because I don’t believe that SCF is violating any ethical boundaries. SCF isn’t falsely claiming anything is his and he isn’t using anyone else’s work to turn a profit (which is more than the accountants who typically benefit from copyright laws can say). SCF cites where Exit Fate‘s music comes from, players are already familiar with Exit Fate‘s background and the only profit he accepts from his project comes from players that voluntarily donate an amount of their choosing.

But beyond any legal issues, I don’t think the creator is plagiarising anybody. It’s fairly obvious that Exit Fate is a love letter to JRPGs. It’s an original game—the characters world and setting are all SCF’s—but it’s also obvious that it’s a reaction to a well-established genre. The game opens with our respected hero ruminating on the nature of his empire’s war against a non-aggressive buffer nation separating his country from its true enemy. Our hero, a father to his troops and a son to his commander, accepts his duty and puts his faith in his country. He obeys orders, goes through a misty cave filled with monsters, is betrayed and left alone in hostile territory to put the pieces back together. This is the same introduction as in Suikoden II (and Final Fantasy IV for those keeping score at home). That’s the point. 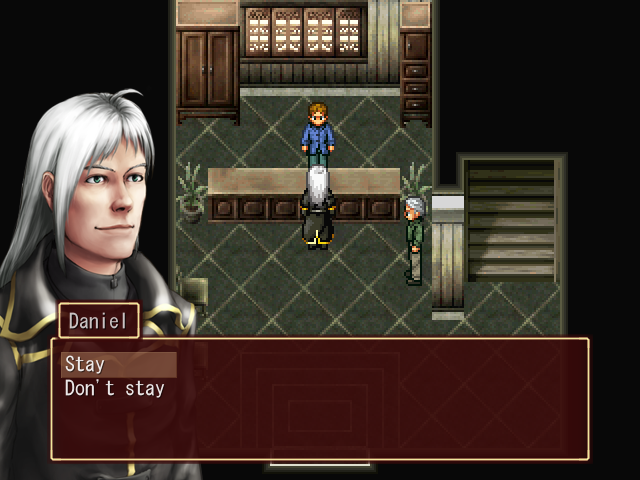 Exit Fate leans on the tropes of older, well-known games to create certain expectations. Once those expectations are later subverted when the story becomes its own, they hold extra weight because previous games have propped up an expected outcome. When that outcome isn’t delivered the audience is purposefully shocked. Because of the player’s presumed experience with previous JRPGs like Suikoden and Final Fantasy, they know that the hero will be betrayed by his nation and we know that his former best friend will be charged with hunting him down. The game is setting up a familiar starting point so it can take its own direction and create its own story with its own argument based on those of its forebears. The point of Exit Fate is to experience something familiar in a unique way; it’s a game that makes the old new. Its audience should know that.

The prospective Exit Fate audience is not new to JRPGs. Exit Fate was made with RPGmaker, an engine created to be accessible for people looking to make RPGs for other RPG players. RPGmaker is only equipped to create games of a certain storied aesthetic. It’s designed to resemble 16-bit JRPGs. Other things can come out of the program (go play Mainichi), but it’s primarily used as a tool to create Final Fantasy fanfiction. One does not typically pick up a game made from RPGmaker without knowing what an RPG is, specifically the certain kind of RPG that RPGmaker is built to make. It’s this presumed player familiarity that makes Exit Fate what it is. It deliberately looks, sounds, reads and plays like classic JRPGs, playing it without those experiences makes it far more difficult to understand it.

In the first seconds of Exit Fate, the player will recognize the tracks. They’ll know that they have heard that exact composition before in Chrono Trigger or Secret of Mana or Final Fantasy VII. Again, that’s the point. The track that plays in a sleepy fishing village of Chrono Cross is the same as the sleepy village of Exit Fate. The player is supposed to recognize the track and all the feelings evoked by that beautiful music are supposed to flood back into them. Whether it works or not is a different matter, but it isn’t theft. The lazy guitar picking over the soft, warm melody of Fisherman’s Horizon in Final Fantasy VIII connects the player to a place and mood, Exit Fate recycles that connection to its own places with its own moods: again, making the old new again.

Almost everyone that plays Exit Fate will have played at least a few of those old games. SCF isn’t pulling one over anyone; most people who would want to play Exit Fate already know who Nobuo Uematsu and Miki Higashino are. SCF states outright in the credits that he’s reusing content. He recycles in order to celebrate the original creators of the content he’s referencing. For the Exit Fate players that didn’t experience the golden age of JRPGs in the fourth to sixth console generations, Exit Fate is an excellent primer: it summates the qualities, the grandeur, the bombast, the silliness, tragedy and unironic beauty of the genre and—I hope—intrigues its player to look into the game’s source material. SCF isn’t overwriting its inspiration, he’s making a case for it. Exit Fate is as much preservation of the genre as it is a contribution to it.

Zeboyd Games—makers of Breath of Death VII and Cthulu Saves the World—recycle content in much the same way with must the same purpose (“‘A Game of Chess’: Breath of Death is The Waste Land of Video Games’.” PopMatters. Apr 23 2013.). But the loving self-parody Zeboyd have come to be known for is a vaccine for criticism; they wink and nod at us (“aww, look at how crazy these old games were! Ain’t they lovable?”) where Exit Fate takes itself more seriously, and therefore opens itself to serious rebuke.  Games like Breath of Death and Exit Fate are throwback JRPGs inherently tied to older content. Their raison d’être is to celebrate a tradition of games that has past and to add a modern voice to ancient scripts. They’re supposed to make you think of the glory days as much as they are strong and original games in their own right.

The best days of the JRPG are past. That’s okay. In fact it’s great: it means that the best days of something else are ahead. The legacy of the JRPG is still provides an abundance of excellence and games like Exit Fate are designed to remind us of that. Exit Fate goes a step beyond Final Fantasy XIII and AAA attempts to “revive” the genre because it accepts and embraces the history rather than burying it in gimmicky, modern design philosophies. Exit Fate doesn’t trample over its lineage, it rests proudly on the shoulders of its predecessors. Its success is in how it adds new elements to old systems without trying to cover them up.

What this comes down to, I think, is a plea to download and play Exit Fate. It seems like a lot of players heard one familiar track and recoiled in disgust, quarantining it from “original” games. I don’t think it belongs in plagiarist’s prison, I think it’s an interesting game if you like its history and it makes a better case for its tradition to newcomers than any squealing fanboy or girl like me could.

Further reading: Zhang, Yan. “Exit Fate: Why jRPGs Suck and Why You Should Play Them.” Necessary Games. Jan 18 2010.