I wrote my most recent article on the value of chance in video games (“Gaming the Dice: How Randomness Contributes to Game Experiences”. PopMatters. Jun 11 2013) based, mostly, on Expeditions Conquistador. In Expeditions Conquistador (God, what an awful title) I chose to play the game on the Ironman setting. With Ironman activated, the player is unable to create any unique saves, nor are they able to reload any earlier save states. Furthermore, the game overwrites the last save at every checkpoint. This means that all decisions become permanent. I’ll relate to you, now, some of the bullcrap that can happen with this setting activated (minor spoilers for Expeditions Conquistador to follow).

The player must set up camp every night and assign their troops to specific jobs. Among other things, the player must assign guards to protect themselves from a random event ranging in danger from losing some crafting supplies to being engaged overnight by dangerous enemies who have a number of significant advantages. While exploring early in the game, I had set enough guards that the odds of a successfully defending from an attack were about 80%. Nonetheless, I received the worst possible breach of defence: an attack at night, where I had to engage in combat, outnumbered, without the preparation phase to set up traps or position my starting troops and without the use of my go-to melee fighter. To use one of my favourite Arrested Development idioms: I was in a hot mess.

Eventually, the battlefield was reduced to 1 enemy melee soldier, versus 2 of my ranged fighters. In nighttime battles, ranged fighters take a massive accuracy penalty. So even though I outnumbered my enemy, the two were eventually cornered by the one who then, with only 7 of a possible 100 HP left, slew my last hope for victory. If I had one extra turn or if one of my misses had been a hit, I’d have won. But I lost. And one of my scholars, Mercedes Valiente lost her life in the encounter. “Why?” I raged, “I had done everything right! What are the chances!?”

Now, a related history lesson. Franz Ferdinand was the prince of Austria on a visit to Bosnia in 1914. A group of terrorists (kids, really) decided the visit was as good a time as any to assassinate Ferdinand in protest of Austria’s occupation of the Balkans. First, they tried and failed to throw grenades into his car. The attempt injured a handful of Ferdinand’s staff but left the archduke and his car unharmed. Later, Ferdinand insisted on checking up on those injured in the explosion. His driver, however, got lost and took a wrong turn en route to the hospital. The street the driver turned down just happened to be the street that one of the few would-be assassin’s was hanging around. Archduke Ferdinand was delivered by sheer coincidence to the only person in Sarajevo with both the means and intent to kill him, and his assassin answered providence with a pair of bullets. The First World War began exactly one month later.

The point of this is that, if something like Ferdinand’s death happened in a film or a book—where we expect a clear and logical sequence of events—we’d be outraged at the lazy writing. But that’s how chance works. Ferdinand was this close to escaping: which could, perhaps (but probably not), have allowed international tempers to cool enough to avoid The Great War. But that wasn’t what happened, Ferdinand rolled snake eyes against the universe. Tough luck, but we don’t really allow that in our fiction, our supposed bastion from chaos.

Games, however, allow us to explore randomness in a different way. My outrage at losing my scholar in Expeditions Conquistador has special meaning because I know I was just this close to saving her, and it haunted me every time I had an invisible dice looming over me from that point on. It was a hard, unjust lesson. Playing on Ironman made every decision real and the consequence of every risk significant (Reid, Christos. “I Am Ironman”. Gamers With Jobs. Nov 13 2012). It was a challenge outside the regular bounds of tipping the “damage output vs. damage tolerance” scale.

Challenge is an endlessly fascinating subject in games (Williamson, Alan. “Blogs of the Round Table: January Roundup.” Critical Distance. Jan 31 2013) and one of the effects of challenge, I believe, is that it pulls the player into the game’s world (“Challenge is Conflict: How Difficulty Makes Game Narratives Work.” Medium Difficulty. Nov 6 2013). Chance is a constant challenge, there is a practised skill in Expeditions Conquistador and strategy is key to every element in the game, but the player is always strategizing against randomness and randomness keeps a sharp edge hanging over every decision. As I’ve written before, this is a game that needs to be difficult because of its immensely difficult subject matter (“To Explore or Conquer: Colonialism in Expeditions Conquistador.” PopMatters. Feb 26 2013). Chance—especially in Ironman mode—keeps the game challenging and meaningful, even during the admittedly soft normal difficulty setting.

One of the interesting things that Mattie Brice said in her guest appearance on the Experience Points podcast was that losing a unit in combat means nothing if the game treats said units like pieces on a chessboard: for the loss to have any meaning there must be an emotional attachment  (Juster, Scott, Jorge Albor and Mattie Brice.“EXP Podcast #211: Dissecting Difficulty with Mattie.” Experience Points. Feb 13 2013). That was my experience with losing my scholar in Expeditions Conquistador. I was responsible for her, and I didn’t even do anything wrong, but the loss still hit hard because, in the end, I was at the mercy of the dice. I was high levelled, I had plenty of crucial supplies, I was just outside of town. I did everything right but I was still vulnerable. That was the only time in the game I’d suffered a defeat in combat, and even then I came to within a lucky dice roll of winning it. But I still lost and it still meant something. 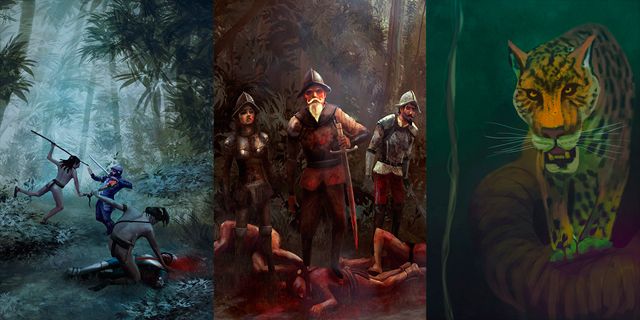 Maybe this is just me once again touting what seems to be an unpopular idea of limiting player control in a game’s world (“In the Third Person: Against Player Authority.” PopMatters. Jan 22 2013), but factoring for randomness is a big part what compels me in games (both tabletop and video). Not just in calculating my chances of success or strategizing around unknown variables, but also in drawing me into a world and a story. It may just be personal taste here, but there’s an appeal in knowing I only have as much control over a situation as I have knowledge, and that eventually I must risk myself against what I don’t know. Challenge does not have to come down to demanding more twitch reaction plays or limiting the effectiveness of grinding. Sometimes the best way to feel the weight of a decision is to leave it to the dice.