Men and women in Ferelden are generally regarded as equals. Both genders are evenly represented in most organizations, noble houses, and military forces.

~Text in the character creation screen of Dragon Age: Origins

~Subtext in the character creation screen of Dragon Age: Origins

One of the experiences that I didn’t get to elaborate on in my Unwinnable article (“Who’s Afraid of Virginia Cousland?” July 23 2013) was my protagonist’s queerness in Dragon Age: Origins. In the article, I discuss how playing a woman gave me some sense of what it’s like to be negatively impacted by my gender in an environment where my gender is not normatively associated with my position and employment. There’s a lot of power in experiencing a world from a perspective outside your own and it’s one that I’m continually impressed with games for being able to create (Mastrapa, Gus. “Every Gamer Should Cross-Dress.” Joystick Division. Jan 17 2011)

Dragon Age: Origins created another unintentional narrative for my Virginia Cousland that left a significant mark on me. As I became closer to my character and entered her mind, Dragon Age made me realize that I was a lesbian. I don’t want to suggest that it exactly replicated the experience of being queer. But Dragon Age made me realize my character’s sexuality from within her own mind and it gave me some sense of what it might be like to come to terms with one’s sexuality in a world where said sexuality is not painted as the default.

Being the hero of an RPG I knew that, eventually, the men in my party would  line up for “the sex” and that I would have my pick of fantasy beefcake. It was something that I put a good deal of thought into (it’s a long game and you get to know the people in it). Everybody had a good deal of respect for me based mostly on my willingness to share the random knickknacks I picked up with them. I knew that it was only a matter of time before I shared enough knickknacks to spark somebody’s capacity to love. In preparation for this, I started considering which of the aforementioned fantasy beefcake would be the most appropriate on my character’s arm.

I couldn’t come to a satisfactory answer. None of the men in the party seemed like they “made sense” for Virgina. Having no knowledge of which character would—or could, as the case may be—take a romantic interest in her, I seemed to have plenty of options to consider. But, again, it just never felt right. When Alistair and Zevran turned out to be the only characters took any interest in Virginia, she and I became even more disappointed. Alistair annoyed us (it wasn’t until I replayed the game as a more patient character that I understood the appeal of him) and we had difficulty taking Zevran seriously. I shrugged it off and decided that since nobody “felt” like a right match for Virginia than it was only appropriate for her not to match with anyone in sexy, commonlaw matrimony. Achievements be damned. No harm ever came from being single, unlike zombie-dragon apocalypses (which was supposed to be my main priority anyway). But I was surprised by a sudden change of heart during Leliana’s sidequest.

Leliana’s sidequest involves tracking down her former employer and lover, Marjolaine. When Leliana revealed so nonchalantly that she was once in love with a woman I was quite surprised. I never planned to play Dragon Age so I didn’t do any preliminary reading on it. I didn’t know there were any same-sex relationship options (I don’t know why, having played Mass Effect) so I hadn’t even considered the possibility that I could be with another woman. It wasn’t that I didn’t want to be with anyone, it was that the only people I figured I could be with just weren’t what right for me.

It dawned on me: Leliana was perfect for Virginia. Leliana had a dark past, she had an understanding of the finer things of life and how to weaponize class, her morality was checkered but she also provided hope for redemption and reformation. She escaped her criminal upbringing and now she was trying, successfully, to change her ways for the better. Though she and Virginia were very different people, there were parallels between them that suddenly struck me as so obvious. Virginia was short-tempered and violent; authoritative and always worried about going too far. I gathered all this from the decisions Virginia and I had made together and the thoughts in our shared brain while we made them. If anybody in the party was “the one” for my protagonist, it was Leliana. Not because she was a woman, but because she was Leliana.

Granted, I’m a straight man in a commonlaw marriage with a red-haired woman who has a lovely singing voice and a passion for poetry, so more than a little of that carried into my experience of the game. So take all this with a brick of salt. Virginia’s attraction to Leliana is the same as my attraction to somebody who is on the surface quite like her. But realizing—from the perspective of my character—that there was somebody in the world that just “felt” romantically sensible and that she was a woman and that I could be with her against my every expectation had no small impact on me. In a moment, both my character and I came to the realization that she was a lesbian.

The option to romance Leliana as a woman is a good deal more difficult than any other of the possible romances. There are only two prompts that lead into a romantic affair between Leliana and the player-character that must be responded with a specific chain of answers. It’s intuitive enough, but if the player misses it, than they miss it. I missed it. Finally, I was left in this position where Leliana was the person who helped my character realize her sexuality, she was the person that my character wanted to be in a relationship with, but whom I had accidentally shown disinterest toward in my ingrained assumption that in the game—read, the world—it was impossible for such a relationship to exist. 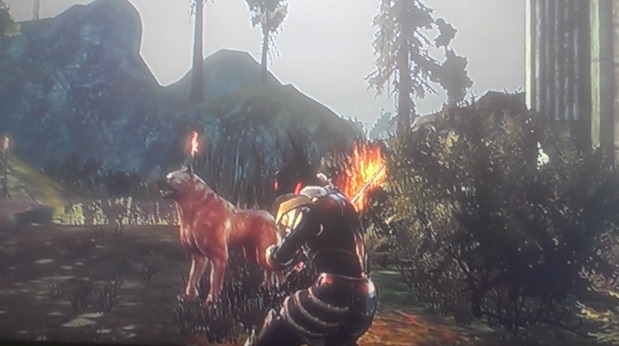 There was this unresolved, bittersweet discovery that I had made with my character that she and Leliana “belonged together” but that the realization came too late. Leliana had gotten over her attraction to me-as-Virginia before we realized Leliana had an interest in the first place. So while Virginia realized she was a lesbian, she only realized it after she rejected “the one.”

Virginia knew she was in love with Leliana, but Leliana had moved on and there was no way to reignite any feelings that they could have shared. Try as I might to bring up “us” again, Leliana only wanted to talk about stories or about Marjolaine. All I could be to her was an embarrassing one-time crush.