About two-thirds of the way through Binary Domain, the player enters the evil Amada Corporation’s tower of evil. It’s a sleek, modern, generic company headquarters. The player walks by a bathroom and a teammate, Shindo, halts the team’s progress so he can step inside to make use of it. During this time, security attacks the rest of the party and they must hold their ground until Shindo finishes and returns to the squad. This scene is a defining character moment for Shindo and illustrates the game’s central tension between artificial and human intelligence. Throughout, artificial life is associated with labour and human life with suffering. As would be expected in a science fiction story dealing primarily with the robotic singularity, Binary Domain is interested in the definitions and limitations of “Humanity” (Alexandra, Heather. “Binary Domain‘s Consequence System: Defining ‘Human’.” TransGamer Thoughts. Nov 7 2014.). In the context of Shindo’s bathroom standoff, the balance takes on different meaning.

Shindo is a member of a resistance in a dystopian vision of Japan. Neo-Tokyo is built over the original city, which is now a slum sinking into the ocean after environmental decay has swallowed most of the world’s coastal cities and spread new disease strains through the lower classes. In the prologue, the player-character, Dan Marshall, explains that robotic labour halted the crisis by retrofitting infrastructure and meeting labour demands left by the dwindling population.

The chief concern of the game’s conspiring American governors ripped straight from The X-Files is that robots can be or already are used to infiltrate upper levels of government. Robots, yassee, are now sophisticated enough to fool themselves into thinking they’re human. Moreover, robots are also associated almost purely with labour. Not only are robots described in the opening monologue as an unthinking proletariat in construction, manufacturing and civil service, but they also man most of the unskilled and servile labouring needs in the new world. Most obviously, Marshall encounters robots as a brute force policing apparatus, but he also encounters robotic janitorial staff, cashiers, wait staff, receptionists, drivers etc. Marshall’s squad, in their tour through sewage plants, public transportation vehicles, factory farms find modern industrial and civil demands in Japan are all fully automated and devoid of human life. Robots constitute the entire labour force and the only people Marshall meets are between gunfights. Labour and infrastructure are entirely mechanized and they represent the primary settings, set pieces and antagonists in the game. The only humans on the job are the player’s squad of robot wet-workers, administrators, a detective and other white-collar professionals.

So a Marxist reading of Binary Domain becomes easily accessible. Robotic androids or automated facilities are associated with labour and the ruling class is frightened of robotics infiltrating governing authorities: that is, humanity. Humanity, though, isn’t glorified in Binary Domain in the way that the characters of the game glorify it. To the human characters, humanity is sacred. Humans boast about it and they defend it violently. However, all that separates humans from machines in Binary Domain is the capacity to suffer. In scenes where we see cyborgs exposed the scene frames the subject sympathetically while they are frightened and injured (Filipowich, Mark. “Just Killing in Binary Domain.” bigtallwords. May 9 2013.). Beyond that, human characters are constantly betraying one another, they manipulate and rob one another. They’re perverted and they’re gross. They suffer and, like Shindo, they have to stop and shit.

Humanity is defined in negative, it’s what somebody else doesn’t have and so justifies the main cast’s violent and illegal invasion of Japan that premises the game. The Amada corporation produces robots that pass as humans and so, Yoji Amada, its president, must be killed. Humans, though, are always stealing, exploiting or betraying one another; looking at their behaviour, there’s nothing at all sacred about them. Divorced from labour, they scheme and exploit one another. Throughout, Marshall nakedly mistrusts and dislikes machinery but it’s revealed near the end that his negative feelings to them are rooted in his relationship to his abusive father. In a flashback, he beats a service android with a bat because it did not intervene when his father hit him and his mother. The singularity promises an end to labour and infinite leisure but, in Binary Domain, it just perpetuates abusive authority figures. Marshall and the other human characters don’t trust artificial intelligence even though—in fact, because—they lack ambition and the self-direction that people use to exploit other people. They work and are okay with working inside a power structure that everyone secretly knows isn’t right. Marshall and company know they’re breaking international law by invading Japan, they know that the treatment of the poor is wrong, but as an arm of the status quo they persevere and blame the cognitive dissonance on the machines.

Several figures explore the tension between the robotic labourer and the untrustworthy, bourgeoisie human being. There is Amada himself, the long-dead robotics genius whose work is robbed by an American firm. Amada’s labour produces the perfect AI, which then develops human intelligence. The AI’s first act upon reaching human levels of intelligence is killing its creator and manufacturing an artificial human body for it to occupy. The AI develops the capacity for endless labour as a machine and develops the self-interested destruction of a human. On the opposite end is Shindo, shitting in the bathroom while unthinking killbots swarm his friends outside.

Marshall and the player represent a repressive state, coercing symbols of personified labour back into their place with sci-fi military tools. Shindo doesn’t belong in either side of this binary, though, because he is a rebel. He doesn’t fit in with the rest of the player’s ragtag bunch of international robot-assassins. Shindo fights the status quo. He isn’t very good at it because, unlike Marshall’s company, he doesn’t have the tools to do so, but he stands for people marginalized by the automation of labour and he is the only human character who neither turns on another person nor is ever betrayed by a human being.

Shindo represents the jobless underclass made obsolete by robotic labour but he also trusts those in his movement. In his unique position, he is, perhaps, the ideal balance between each side of Binary Domain‘s, uh, binary. However, he suffers for this, not at the hands of a human, but at the hands of a machine. Shindo’s second-in-command, Yoshiki, is a cyborg living under-cover with the resistance since its inception. Though Yoshiki never learns what he is, when the player joins the resistance, he alerts the Amada corp and effectively shuts down Shindo’s resistance in a single swoop. Here, the artificial intelligence, Amada, pits the agents of labour against other agents of labour, the human under class, through an unknowing spy. Resistance members don’t own their own labour and they can’t even sell it in a transhuman economy, Shindo trusts and places faith in other people, for which he is punished. He is displaced as a labourer and as a person.

Ultimately, Shindo dies in a bio-scrap yard, where malfunction cyborgs covered in splaying organic tissue are discarded. While the player escapes, Shindo is surrounded by after-images of Yoshiki, who swarm and kill him. Shindo is the only character the player can’t save. The player can save Bo, Rachel or Cain—all of whom complicate the machine-human binary in their own ways—but Shindo is doomed. He fights the existing power structure, but only because that structure allows him to; he trusts the people around him and that makes him easily exploitable. 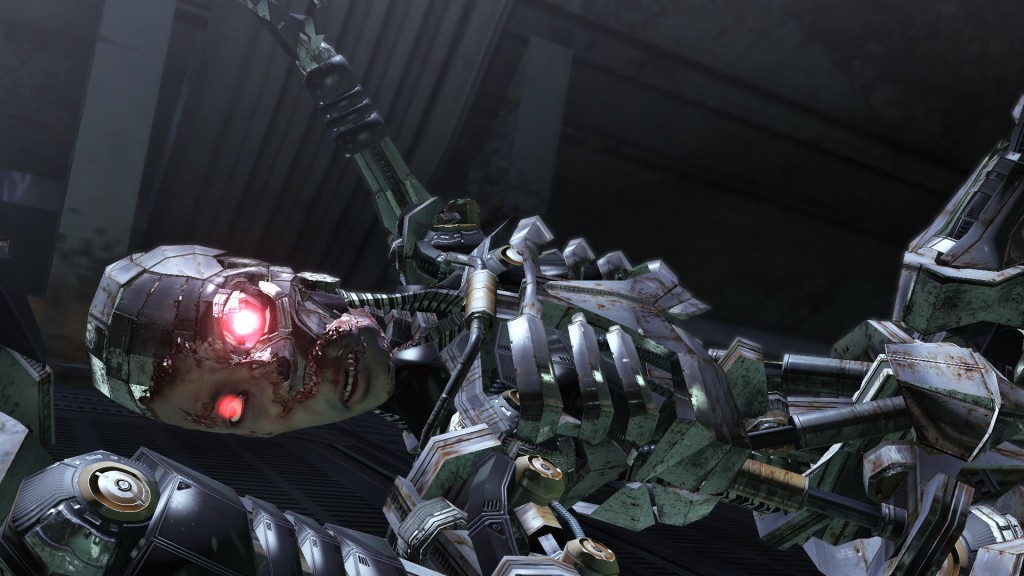 The bathroom scene is important in understanding Shindo because it ties him to the abject. When Faye tells Shindo there isn’t time to stop, he spits back “easy for you to say! You’re not the one about to shit your pants.” He’s the only character in Binary Domain to accept the inconvenience, vulnerability and ugliness of being human. Most of the cast are saved by reconciling the differences between artificial and human intelligence, labour and suffering.

That’s Binary Domain‘s point: Dan and Faye oscillate their loyalties, Bo’s treachery and death can be prevented, Cain can be rescued. All this can be done through the game’s central command issuing gimmick. Like many games, characters will gain combat bonuses when the player acts or says things that are in line with their own views. The player gains favour by performing certain combat feats (headshots impress Charlie, explosions impress Rachel) and loses them in a similar way (friendly fire incidents or inappropriate voice commands). The biggest squad benefits come in conversations. The catch is that the player does not speak to their allies by typing parser commands or selecting options from a list (at least, not on default settings). The player speaks into a microphone to speech recognition software. So to succeed the player, a human, must literally speak to the artificial intelligences of the characters in the game. It’s a gimmick that works better at manufacturing hilarious moments for housemates than as a functional aspect of the game, but I still find the idea behind it effective.

The very happy ending has everybody leaving the story a little bit stronger, a little bit more understanding. The final boss and Amada are corrupted respectively by their dominating human and artificial interests. The rest of the cast folds each end of the binary into themselves. Except Shindo, who was already a compromise of conflicting interests and is killed for it.