I don’t play Bethesda RPGs. Not because they aren’t good; in fact my second-hand opinion is that they’re very good. I’ve developed this opinion after a lot of critics and writers I respect have engaged with Bethesda RPGs in very intelligent ways. To see what I mean take a look at Michael Clarkson’s critical compilation of Fallout 3 over at Critical Distance.1 I’d even go so far as to say I like Bethesda RPGs. But I don’t imagine that I’ll ever play one for more than a few hours, and certainly not to completion. They just aren’t for me. They’re too big, progression is too vague. The very qualities many like about them—that even I will admit distinguish them—push me away. They aren’t my cup of tea. That said, Fallout 4

looks like it is very close to being a game I’d want to play.

I want to stress the grain of salt one should take when reading this: I acknowledge that Fallout

is not for me and I am not for it, that the storied series developed by multiple studios has a rich history,2 that there are different ludonarrative approaches to each instalment in the series,3 that its tone offers different personal expressions to different people.4 So going forward from here keep in mind that I’m not trying to say that Fallout 4

shouldn’t exist or even that it should be changed, rather I’m just speculating about something that its space offers. Does that make for bad or useless criticism? Maybe.

At any rate, what most intrigues me about Fallout 4

is its character creation system. As with Fallout 3

, character creation is tied to the establishment of plot. Fallout 4

, Boston is shortly destroyed in a thermonuclear war and the PC’s family evacuates into an underground safety vault, a trademark of the series. Finally, awakening from cryogenic slumber a century or so later, no-goodniks invade the vault, murder the PC’s spouse and kidnap baby Shaun before refreezing the PC for another few decades. Upon waking up for realsies, the PC begins their quest to avenge their spouse and find out what happened to their son. 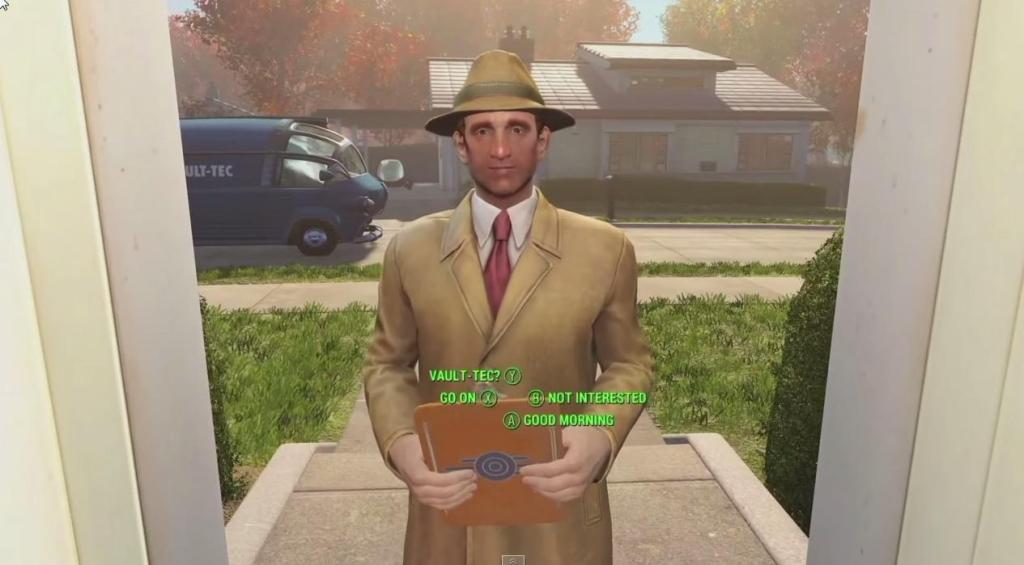 But I want to take a step back. More than any other in the series, Fallout 4

builds a retro-futurist aesthetic. By that I mean that it tries to imagine the same future that previous generations did. Retro-futurism speculates on possibilities that were imagined before the future seemed uncertain, before events revealed how precarious human society is or how dangerous and horrifying the future seems with super-viruses, nuclear weapons, energy crises, surveillance states, wealth gaps, and so on and so on. But if you lived in the suburbs in a major American city in the 1950s, chances are you felt pretty good about the future. As the 50s faded away, the lost optimism of the greatest generation continued to haunt an ever-more cynical America until, by the 1980s, the 50s were a national “good ol’ days” valorized under Reaganomics.5 Retro-futurism wishes that we return to a time when technology offered progress toward universal improvement and the future offered boundless opportunity, unending leisure and as-yet unimagined modes of fun. Tomorrowland

is a great contemporary example of this kind of aesthetic at play.

Although it looks forward, retro-futurism looks forward from the supposed desires and hopes of a past and thus it’s ultimately a conservative gesture. Any aesthetic can be politically reworked and reinterpreted, so retro-futurism doesn’t need to champion a form of conservatism as such—Terry Gilliam’s Brazil is most definitely a vision of the future according to the past but rather than a nostalgia for the 50s, Brazil highlights just how fucked up 50s policy and cultural priorities were. I’m not interested in making so trite an argument as “conservatism is bad” but I do want to stress that retro-futurism is interested in carrying tradition into the future, and that interest can be glorified or it can be parodied. Most of the Fallout

series highlights the destructive possibilities of 1950s nostalgia, but from what I can tell Fallout 4

, even though it presents a world eradicated by thermonuclear war, there does appear to be some nostalgia for 50s suburban Americana. 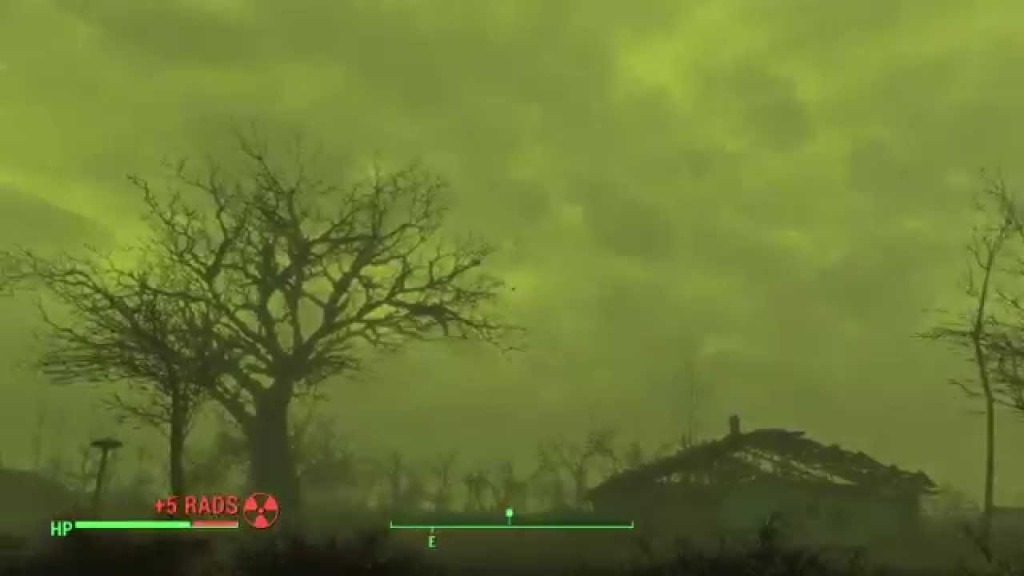 The game opens in a pre-apocalyptic Boston. The PC has a nice home, robot servants, a happy spouse and a new baby. It seems like a nice life. From this brief glimpse into the world, I think we’re meant to feel a little sad that this nice life is turned into a dusty wasteland. After all, the PC’s core motivation is vengeance for their dead spouse and a longing to find their child. That old life must be worth avenging, that son must be worth rescuing. Fallout 4

appears unable to resolve the tension between reclaiming what is lost in the apocalypse and the exploratory adventure of wandering the wastes with power armour and a mini-gun6 and I think that tension comes from the unanswered question of whether player is supposed lament or enjoy the apocalypse. Again, that tension is, I’m sure, a part of the game’s charm, but the more I think about Fallout 4

the more I imagine a version of it that (in my mind, at least) sheds that tension.

there are markers of the old world: vault-tec shelters like the player’s that have been evacuated or destroyed, crumbling buildings with yesteryear’s propaganda still plastered all over them, skeletons strewn across the streets tantalizing the player with just a few narrative gaps to round out a history.7 In these remnants we see the retro-futurist nod backward to a lost world. In one of the game’s major mechanics, a crafting system in which the player must put together buildings, furniture and appliances needed for a village, we see the retro-futurist longing for a brighter future. I don’t think it’s much of a stretch to say that through this system the player is rebuilding a version the suburb lost to the nuclear fire in the game’s opening. All they need is a few neighbours to invite over to a barbecue and we’ve got a hell of a Saturday. 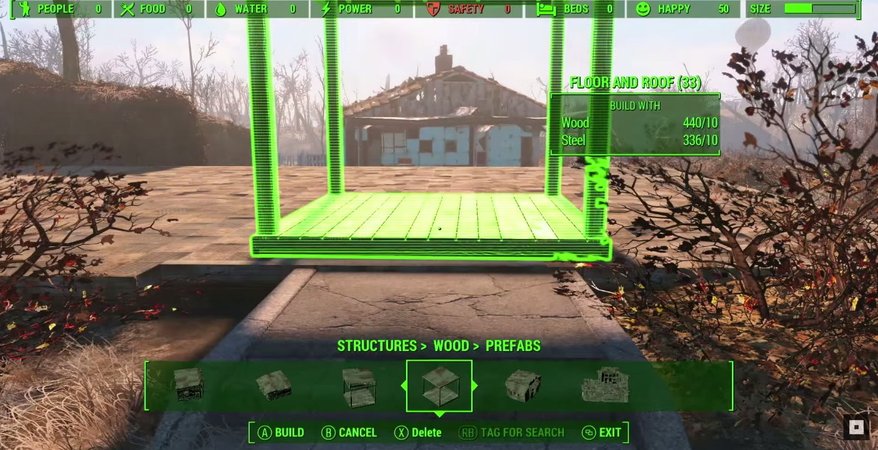 Except, I think there’s something missing. Perhaps the most reliable talking point in conservative rhetoric is family. Not that families don’t exist outside of tradition, or even that we can take for granted that “the traditional family” deserves conservation, but if you’ve followed me this far in saying that retro-futurism looks to preserve a lost vision of the future, surely a part of that preservation is some vision of a family in some shape or form. But the PC’s spouse is dead and their son is gone. Maybe that’s the point of Fallout 4

. And that’s fine, but stay with me while I imagine something different.

What if, instead of a dead spouse to avenge, the player had two avatars to manage. Grand Theft Auto V

operates with a vast world explored by a player occupying multiple subjects and one of my ongoing fascinations with games is the unique way they unite disparate subjectivities through shared narrative agency (*ahem* plural protagonism). So, yes, this reading of Fallout 4

is all about me, but hang in there, I’m getting to my point.

I imagine a Fallout 4

where the two avatars designed at the outset remain alive and mutually bear the burden of moving the game forward; not as a hero-sidekick dynamic, but as equally agential figures in the story. The catch is that each character must not only explore the wastes, hunt down materials for their post-apocalyptic suburb and comb the wastes for loot and weapons, but maintain their marriage in spite of it all. Surviving the end of days means staying together as a family even as giant scorpions and nuclear-powered killbots threaten to tear them apart.

Imagine a marital-satisfaction meter as critical as a health meter: will the more charismatic partner grow sick of always being the one to have to do the emotional labour of charming mutants out of eating babies at the orphanage? How will the more courageous partner deal with cabin fever after being left out of one too many sidequests? Retro-futurism desires optimism in the face of catastrophe, so as far as I see it, maintaining a marriage strained by cold-war cultists and radiation-poisoned bog monsters satisfies the retro-futurist project of finding hope amid uncertainty but it does so through the lens of a deeply human experience.

is fine the way that it is, I can’t help but envision what else could be done with its setup. I’ve written in the past how sharing narrative duties among multiple perspectives is particularly effective in a theme of family8 and how relationship and sex dynamics speak to character development9 so I’m particularly fascinated how a game like Fallout 4

I’ll once again restate that the Fallout

series has never really been for me, especially the later games in the series, so I’m less interested in adapting it to my own tastes than I am pointing to an underrepresented thematic possibility. Normally the rallying cry at this point is that games could be so much more than pulpy science fiction adventure, and while that’s true, I think the pulpy science fiction adventure still offers a space to play with love and human relationship. I find it fun to imagine the different ways we could imagine role-playing as a new way of engaging with systems; systems of sex and marriage, systems of prognostication, systems of social work. This is without even mentioning that non-binary, homosexual, asexual, non-monogomous relationships all offer their own potentials for expression outside the tired story of avenging a lost love. Compared with cooperation, vengeance is easy. Games happily abstract horror, danger or violence through human relationships10 but I want to see play express love in a game as focused on the strains put on people who love and fuck one another as it is on blasting mutants. I want to see blasting mutants as a way to negotiate personal boundaries and work toward a better future, not as a method of scrounging the remains of a broken past. I grant that, in the end, this might just be a long-winded wishlist from a game I have repeatedly confessed to having only a detached interest in, but every time I think of the opening character(s) creation screen I wonder about all the work that a player has to put into a token figure who contributes more to the character in death than in the love they’re supposed to avenge.

W., Nico. “Borderlands & Asexual Representation: How I discovered My Sexuality while Playing a First-Person Shooter.” The Mary Sue. Oct 14 2015.