I don’t usually get to play a game the year that it’s released. Most of the time, it takes at least a year for a game to go down enough in price to be worth buying. Moreover, salvaging the unknown, overlooked, or the just plain mediocre game from a bargain bin lessens the potential sting of disappointment. But Spec-Ops: The Line is different. After being the basis for an entire book of criticism and receiving the resounding endorsement of the industry’s most infamously harsh critic, it warranted looking at (and at only six months old, it’s practically brand new for someone like me).

Spec-Ops sets a watermark for gaming. It’s one of the reasons why Kotaku thinks that video games grew up last year. But what exactly does it do to make it so different than anything else on the market? The most common explanation seems to be that it was developed with an awareness and an acknowledgement of the violence of its genre. But that’s a fairly reductionist approach to the game. All good shooters must be aware of the violence of their genre, even the ones that appear unaware of what they’re asking of their players. Criterion’s 2006 title,Black, treats violence like a mid-nineties action movie does. It isn’t that the developers are ignorant of the violent content; they’re aware of it, just as Yager was in making Spec-Ops. If anything, a developer must be aware of its game’s violence in order to trivialize it.

Black is every bit as self-aware as Spec-Ops, just in a different way. In fact, at a cursory glance, Black and Spec-Ops could be mistaken for the same game. Both games follow hotheaded officers disobeying orders by leading squads of three into a foreign country in pursuit of an American war criminal. Both feature well-intentioned protagonists doggedly pursuing justice in parts of the world marked by recent injustices. Both are smaller stories that never concern themselves with the highest of stakes or the global conflicts of Call of Duty, Battlefieldor Medal of Honour. Both were critically praised but whose commercial success was modest, both are homages to classic action films, and both are based around the mechanic of destructible environments.

The difference, however, is in how they treat their subject matter. Black counts the number of shots fired and the number of kills in a stats menu. The game’s title screen is a close up of various gold plated firearms blasting their payload in slow-motion against a void. The cover art is the title laid in a bed of spent bullet casings. Black relishes the power of military hardware. Military hardware, of course, is used to kill people, but the representation of killing in the game is always removed by several degrees. People are treated more like targets than human beings. They don’t think or feel, and there aren’t even any attempts to make the bad guys seem more sinister, as in Modern Warfare 2’s “No Russian” mission.

Game are made by developers, and the developers of Black consciously decided to portray violence in such a way as to make it clinical, uncritical, and fun. The sound of each weapon in Black is individually pitched to mesh together in what sound designer Chris Sweetman appropriately calls a “choir of guns.” The music swoops dramatically and explosions roar and flash with a pomp that makes Michael Bay seem humble. The whole experience is reminiscent of the early Die Hard films or of Pierce Brosnen’s tenure as 007. Style is the substance, and there’s a substantial amount of style. These conventions aren’t followed arbitrarily; they’re designed to distance the player from violence. 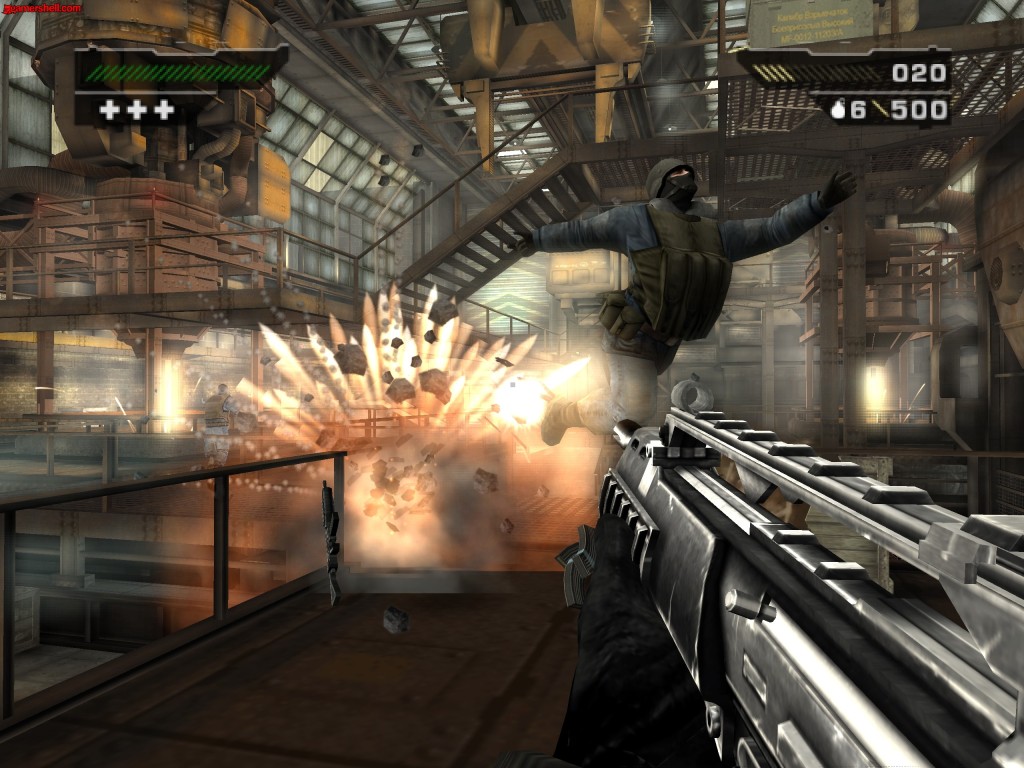 To get to the end of Black, protagonist Jack Keller has to leave behind over a thousand bodies. But enemies keep their faces covered by ski masks, when they’re shot they don’t shed a speck of blood, nobody screams, and bodies disintegrate almost immediately, leaving shimmering piles of ammo behind. Every level of the game is littered with explosives that bad guys conveniently huddle around, and civilians are never talked about because they don’t exist. The only people in the game are Keller and his plucky squad of cowboys, the villain with no speaking lines, and the mean politician-type that picks on Keller for getting the job done too awesomely.

Spec-Ops essentially features the same character in the same situation, but it is detailed differently. Every time that Walker kills somebody, the game drops a weight on the player. Enemies look and speak the same way as the protagonists. When people die, it’s never with grace. When Cpt. Walker pushes on in his mission against orders, he isn’t bravely doing the right thing in defiance of the pencil-pushers back at base like Sgt. Keller (though that’s how Walker thinks of himself), he’s killing more people for worse reasons. But even though the experience and the tone of Spec-Ops is different from something like Black, it isn’t because the developers were more aware of what it was asking the player to do, they just focused on the human element whereas Blackfocuses on the orgy of gunfire.

But both were designed with a focus in mind. Spec-Ops isn’t aware of itself any more than Black is. Spec-Ops is a landmark in games, but not necessarily because it does anything different. Spec-Ops offers a grim interpretation of war, but so did Mass Effect 3. It’s an interpretation of a literary classic, but so was Bioshock. It’s a smart game, but there have always been smart games. So what makes Spec-Ops so different? Perhaps it doesn’t have to be different.