[Originally posted on The Border House]

It’s rare that I’ll buy more than five games in the year of their release. When I do play a game while it’s brand new, it’s usually for a review. So when I was offered a chance to play Giana Sisters: Twisted Dreams, I accepted, not thinking much of it at the time. But when it turned out to be the best game I’d ever had the pleasure of reviewing (Filipowich, Mark. Review: Giana Sisters: Twisted Dreams. PopMatters. Nov 8 2012.), I got excited, because I was finally going to be ahead of everyone else.

And then nobody ended up talking about it. Perhaps it was because Giana’srelease was so close to the much lauded Pid (Rose, Mike. “Pid‘s dilemma – how do you make a 2D platformer that stands out?” Gamasutra. Nov 5 2012), another critically lauded independent 2D platformer, but there has been just about no conversation about Giana Sisters: Twisted Dreams at all. Which is a shame, because at $15 of excellent design and novel art direction, it’s a no-brainer for anybody on a budget looking for a satisfying platformer.

The game functions beautifully. There are virtually no bugs or frame rate issues (a marvel for an indie game that looks so good). It’s easy enough to pick up and play for the first time but the difficulty curve scales so quickly that it never gets stale. That said, with no limit on lives, it never becomes unnecessarily punishing. That’s assuming that it’s played with a controller. It was designed with the Xbox 360 controller in mind, so without an adequate substitute, its design feels a lot less smooth. Tracking down a good controller (a plug-and-play attached to a wireless controller will not work, unfortunately) adds another $10-$40 depending on the importance placed on name brand and unused products. 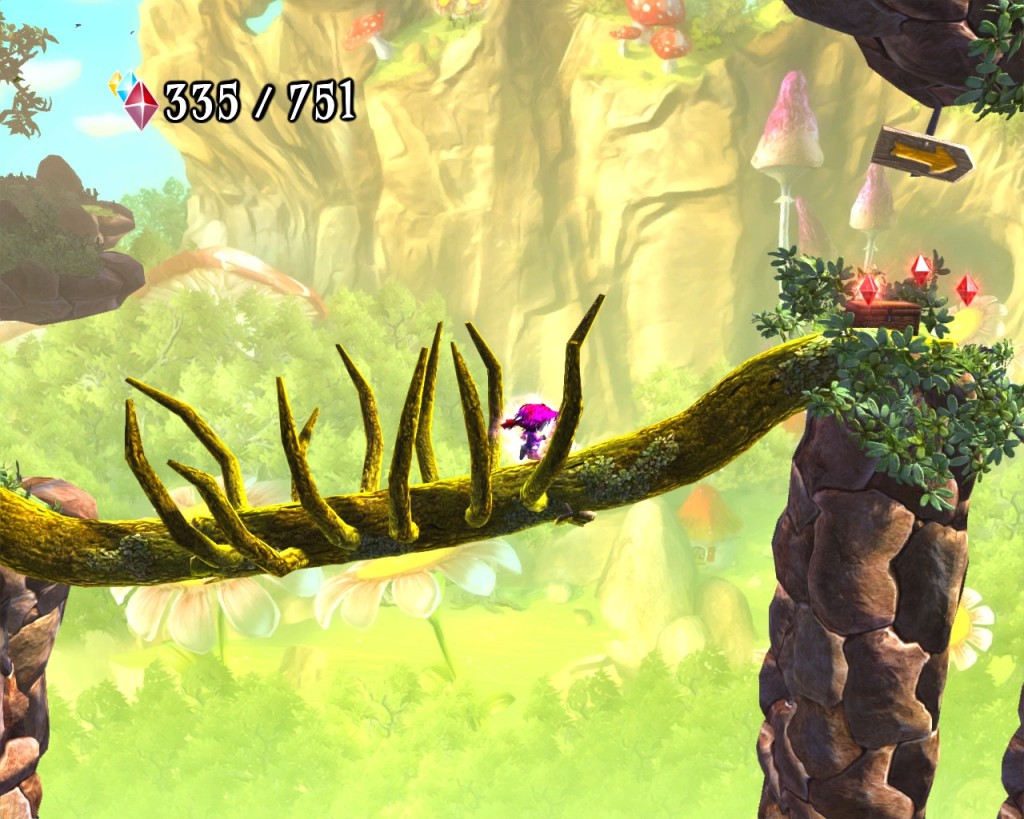 But the real uniqueness of Giana Sisters comes from its ability to maintain a narrative without using a single word. The title menu shows the silhouettes of sisters Giana and Maria sitting back-to-back, each playing a game on an unidentified handheld. Pressing start on “Adventure Mode” prompts a portal to open up and draw in Maria. Maria throws her hand and Giana struggles to pull her sister out to no avail. After the briefest hesitation, Giana leaps in after Maria. In the first level, Giana encounters a T-Rex with tiny dragon. The T-Rex snatches up a dazed Maria and then flies toward a castle in the distant background.

As the dinosaur retreats, Giana (and the player) follows the prompts on the background signs that teach her the powers she has at her disposal. Giana shifts between two forms: cute Giana and punk Giana. The former is able to double jump and glide long distances while the latter is able to do a short, fiery dash that dispatches enemies. Cute Giana is blonde haired and wears a baby blue dress while punk Giana has red hair tied into a ponytail and a dark purple and black dress; both are voiced by the same actor but cute Giana’s emoting is far more chipper than her punk counterpart’s.

But what makes Twisted Dreams aesthetically unique is that, when Giana shifts between her two personas, her entire environment shifts with her between a deep red, Gothic hell-like landscape and a bright, cheery cartoon. Shifting between the two is beautifully fluid and mechanically novel, but it also sets up an interesting space for Giana’s identity as a character.

It’s important to remember Giana’s origins. In 1987, the Great Giana Sisters–while appreciated even now as a cult classic–was intended to ride on the coattails of Super Mario Bros. Giana was Mario’s distaff counterpart, a cheap knockoff. But developer Black Forest rescued her from the famed plumber’s shadow by creating a fresh new platformer based entirely around her, and by making Giana’s identity central to the flow of the game. 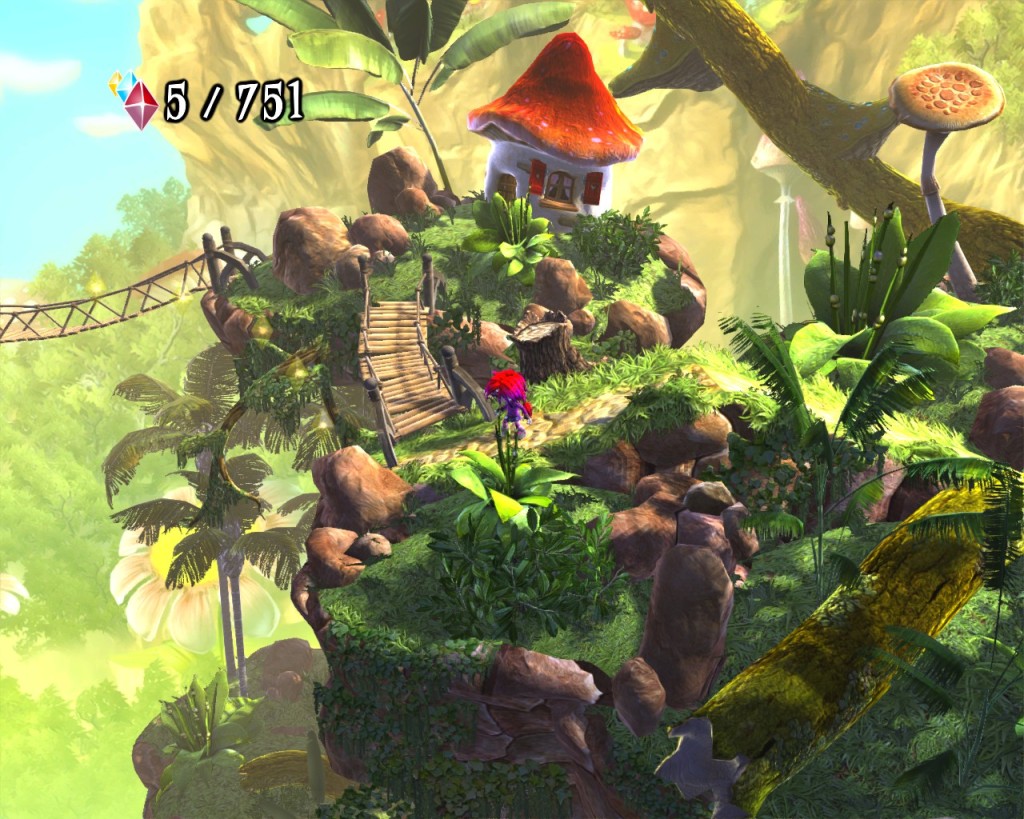 Giana, in Twisted Dreams is a teenager, which is monumental in light of the game requiring her to shift herself and her environment back and forth between radical extremes. Adolescence is the search for identity and autonomy, it`s the difficult period of coming into a distinct selfhood. So for the teenage Giana, it’s important that she is able to be all things at once. Her powers fluctuate between her cute and punk selves, but they are not separate entities, just activated alternately in the same person as the situation calls for it. Activating a twirl or a fireball does not prevent Giana from immediately switching to her other self. It’s often necessary to switch back and forth between her personas multiple times in a single jump or to complete just one obstacle. Giana’s changing personality isn’t a matter of either/or, it’s both/and. She is cute and she is punk at the same time. Her adventure necessitates the entirety of her being, not just one or the other at important points.

Moreover, her environment is always in contrast with her current personality. Her cute self navigates an inferno while her punk self occupies a cartoon. This could be meant to emphasize her aloneness (certainly a prominent feeling for teenagers) but it seems to suggest something different. The reason why Giana’s surroundings always clash with her identity is so that the player doesn’t lose track of their avatar. She’s supposed to stand apart. But this has a narrative function as well. In the game’s dream world, Giana seems to reach an optimal level of distinctness. The music shifts back and forth to match Giana’s current persona, not her environment, so even though she always stands out, the soundtrack provides the sense that she belongs there, that she’s unique, but not alien. She has achieved a comfortable place in a world that she has some control over. 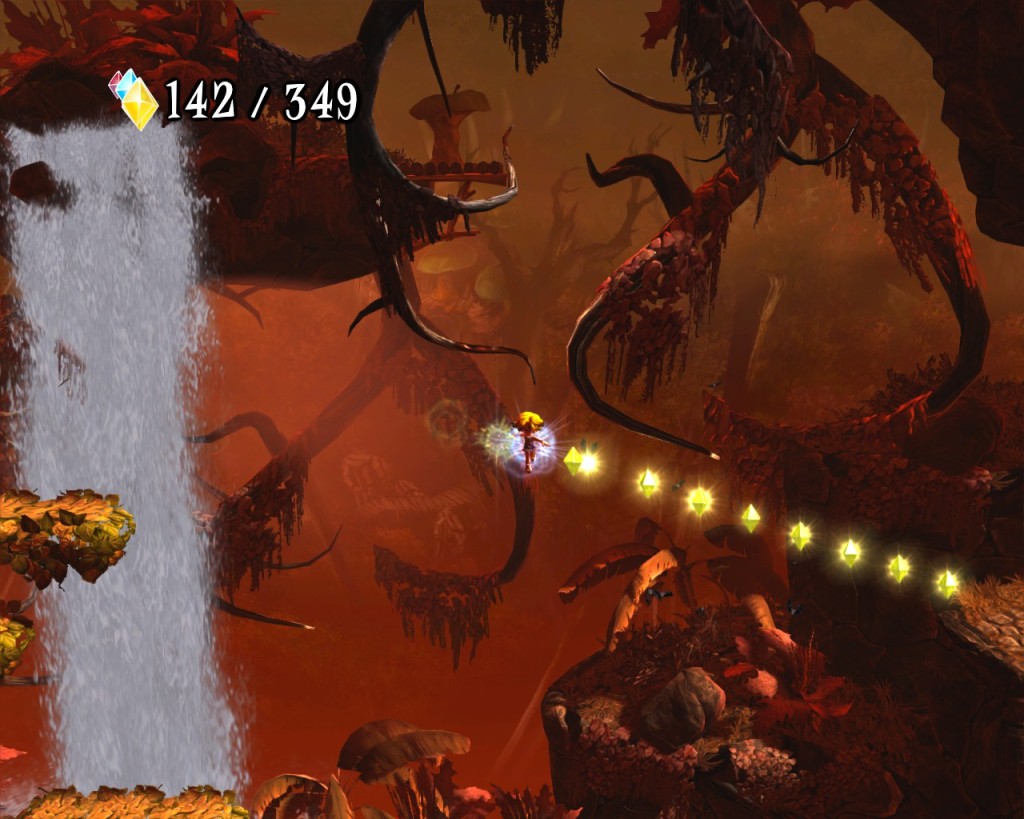 It’s also relevant that the player never sees the “real” Giana. The silhouette of the girl on the title screen is Giana while she’s awake, it’s who Giana “is.” But we can’t say to what degree she’s cute and to what degree she’s a punk. She’s both/and. In the dream Giana achieves a harmony in being many people at once. Black Forest have said that they wanted to focus on the character’s inner conflict but I’m not sure I see that in her. I see a young woman whose complicated and multi-layered personality is an asset. It is necessary for her to be many things at once to save her sister, to explore her surroundings and master the world around her.

It’s an interesting layer to add to a game that, on its surface, is about a sprite jumping over platforms. The subtext empowers a teenage girl who—contemporary media is quick to remind us—ought to be confused, impulsive, angry and frightened. It’s a refreshing and affordable indie title that deserves to be in any platform lover’s collection. Giana Sisters is challenging, charming, brimming with personality and very smart. It’s available on Steam and Good Old Games, with an Xbox Live Arcade and Playstation Network release planned. If the $15 asking price is a little too steep, it’s worth picking up on a sale when it comes along.