Go read the description for Giana Sisters: Twisted Dreams on developer Black Forest’s website. I don’t care much for it. I firmly hold that the author is, and should be, dead, even in games (Filipowich, Mark. “The Undead Author: Artistic Ownership of Games.” Apr 25 2012). So I don’t mind picking nits about a game even with the people that created it. I would like to pick those nits in reference to an article on Giana Sisters that I wrote for The Border House (On Giana Sisters: Twisted Dreams. Jan 15 2013.) In the Border House article I argue that what makes Giana Sisters really great, other than its outstanding level design, fluid controls and scaling challenge, is how it puts its teenage girl protagonist in a position of power. Giana is not just capable, she’s in total control of her identity. Giana is many things at once and that’s her biggest asset. She can’t be typified, she’s isn’t a victim and she’s always in control. That’s without making her a “strong female character.” Twisted Dreams puts Giana in her role without a single word after the main menu. So with this reading, I’d like to deconstruct the synopsis provided by Black Forest Games.

Project Giana is a fast-paced hardcore platformer with dual worlds that Giana will morph between as she seeks to escape.”

Giana certainly is “fast-paced,” but that’s about all I’ll agree with here. It’s interesting that Black Forest calls their game “hardcore” while Steam categorizes the game as casual; I won’t harp on the arbitrariness of the hardcore/casual debate, but I do find it worth noting when I first played the game that the colourful platformer with a female lead was labelled as “casual” by the digital distributor, even while it’s one of the most difficult platformers I’ve played since Donkey Kong Country 2. The synopsis goes on to say that Giana morphs between worlds in order to “escape.” My take was that the world morphs around her, but—more importantly—Giana isn’t trying to escape, she’s trying to rescue her sister. Giana is a hero, not a refugee, she entered the dream voluntarily for an obvious and selfless reason. Furthermore, she doesn’t change to suit the world, her power is to change the world to suit her. Giana is in control of her situation: if there’s an enemy or a wall of spikes that threatens her, it’s in her power to change their path or behaviour or even their existence by donning her other persona. She doesn’t move because there’s an obstacle approaching her, she changes the nature of the obstacle. 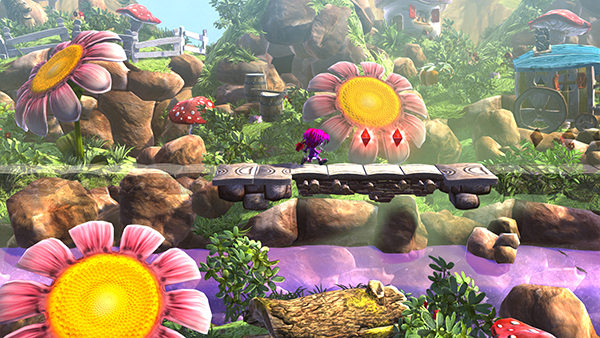 “Use your skill, your speed, your brains, and your powers to defeat the horrors that populate her two nightmares.”

The skills, speed, brains and powers used in the game aren’t mine, they’re Giana’s. Giana is not me, she’s a character and an avatar, but she’s not me. I’m the player, sure, but we aren’t the same person. As for the “horrors” populating her “nightmares,” I again stress Giana’s control over the situation: each “horror” can be destroyed or avoided by a number of Giana’s abilities. There’s always at least one answer to the game’s obstacles and Giana’s ability is never in question. It might take several tries but Giana is always capable of meeting the challenge. There isn’t horror in that, there’s power. As for her occupying a “nightmare,” Giana is positioned as being in a state of comfortable distinctness. In the inferno, she’s bright and cute, skipping and twirling with matching background music; in the cartoon Eden she’s a red-haired badass in black with heavy metal riffs accompanying her while she encases herself in fire to burst through levels. She’s set apart, but not so much that she doesn’t belong. She is unique in her environment, but she’s not isolated, her separation from her environment gives is her strength. She’s got this.

“Plus, when Giana morphs, she doesn’t just change herself, but also her perception of the entire world.”

When Giana morphs, it isn’t her perception of the world that changes, it is the world. This is her dream so it’s her world. The real world is perceived after light enters a person’s eyes and is filtered into their brain. A dream is all brain. The difference is that Giana isn’t just interpreting her surroundings differently, they’re surroundings she’s created, so they actually are changing. This again stresses her significance and strength.

“Gigantic creatures from the depths of Giana’s most horrific nightmares are here to play too. Seriously, these guys are just plain brutal. And you’re going to need to master everything you’ve learned to have any hope of defeating them!”

Okay. I don’t really disagree with any of that…those fuckers are hard.

I want to use language to emphasize how empowered the protagonist of this game really is, especially since it’s communicated so artfully. Sometimes, in such a capitalistic age, bad marketing can kill a great work of art. That isn’t what’s happening here, but it is a shame to see a character who, for me, is defined by her unabashed competence reduced to “protect the little girl from a bad dream.” Especially when so many female game characters in the last five years have been so goddamn terrible. I realize this is just my reading of a simple, straightforward platformer, but it’s worth defending.