Just because a text features a woman who can beat the crap of anyone who says that she can’t does not mean that that text is inherently feminist. Furthermore, not all feminist texts feature a heroine who is physically strong or capable of beating up bad guys. (For instance, Orange is the New Black is a woman-centred drama that lacks an ass-kicking heroine; regardless, it examines and critiques the oppression and exploitation of female inmates in the American prison system.) On a related note, some texts that feature an ass-kicking heroine can still be labelled “sexist.”

A sexist text is one that is defined by, and supports, the attitude that one gender is inherently weaker or less valuable than another. Bob Chipman of The Escapist (a.k.a. “MovieBob”) tackles sexism in a recent “Big Picture” video, in which he addresses “The Pink Aisle” (“Pink is not the Problem.” The Escapist. Dec 3 2013.). He notes that The Hunger Games, while featuring a strong, ass-kicking female character, still supports the notion that women are inherently weak or evil. Therefore, Katniss is an anomaly; she is essentially a male hero who happens to be female, while the villains of the film are effeminate (and therefore weak) men. I think Chipman makes an excellent point: sexism is so insidious that it can creep into even woman-centred stories. 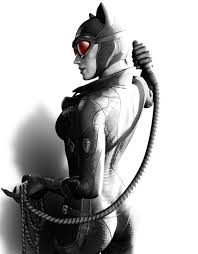 A few years ago, Film Crit Hulk criticized Arkham City for being sexist (“GODDAMMIT VIDEO GAMES: THE FIRST FEW HOURS OF ARKHAM CITY IS LOTS OF FUN BUT SUPER-DUPER SEXIST.” FILM CRIT HULK! HULK BLOG! Oct 19 2011.). The internet protested that the game simply could not be sexist! Yes, prisoners used the word “bitch” a lot and the Joker was unkind to Harley, but Catwoman kicked ass! She beat up all the men who cat-called her (pun absolutely intended). How could this game be sexist when it features such an ass-kicking woman? Isn’t she a “strong female character” that feminists wanted in the first place? Well, no. An ass-kicking heroine does not a feminist (or even non-sexist) text make. Film Crit Hulk is right: Arkham City is a sexist game, even if Catwoman kicks ass.

Like seemingly all media related to comic books or comic book lore, Arkham City seems to view women only as a supporting cast for the men, the “real heroes.” Notable women in the game, like Harley Quinn and Thalia al Ghul, have no role outside of the men in their lives, whether that man is a love interest (the Joker and Batman) or a father (Ra’s al Ghul). Even Catwoman, despite her ass-kickery, only appears in relation to men. The first time we see her is in relation to Two-Face; then, the Joker tries to kill her for the sole purpose of rattling Batman; and for the rest of the game, she appears only to further Batman’s quest. She saves Batman from the Joker (“See, she’s so strong!” cries the internet) but only because if she doesn’t, the game ends. In fact, should you, as Catwoman, choose not to save Batman, you will be treated to a brief credit roll that implies all is lost without Batman, and you are forced to go back in time to save him. In this way, Catwoman is literally a plot device: she is a means of advancing Batman’s story and nothing more.

At other points in Arkham City, women use their sexuality as a weapon, making them femmes fatales. Poison Ivy, Thalia Al’Ghul, and Catwoman herself are notorious for this, since they are Batman’s most prominent female foes. I’m not saying that there’s anything wrong with women who are sexually confident and comfortable in their own sexuality. Where there’s an issue is when being sexual is their only shtick. In one of her “Tropes vs. Women” videos, Anita Sarkeesian points out that the femme fatale trope is dangerous if overused, since it feeds into the sexist myth that women are deceivers who use their bodies to manipulate men (“Tropes vs. Women # 4: The Evil Demon Seductress.” Feminist Frequency. Mar 19 2011.). Therefore, Catwoman is not as “strong” as she may appear since she in fact embodies this damaging, sexist trope.

The only women, arguably, who do not fulfill the femme fatale trope in Arkham City are Harley Quinn and Oracle. But they offer, at best, problematic representations of women. Harley Quinn is highly infantilized. The game treats her as a spoiled brat who throws temper tantrums, thus justifying Joker’s abuse as “punishment.” Oracle, meanwhile, is only a ghost, a voice in Batman’s head. Her encouragement could even be perceived as justifying Batman’s quest, since he is going after the Joker, the man responsible for paralyzing her. If we think of her this way, she’s “in the refrigerator.” (“Tropes vs. Women #2: Women in Refrigerators.” Feminist Frequency. Apr 7 2011.). Thus, Oracle is merely a plot device as well: a means of keeping the story going.

The biggest strike against Arkham City, and the main reason Film Crit Hulk is correct in calling it sexist, is the way that it internalizes the sexism or patriarchy of our world and doesn’t seek to challenge or change it. In this world, Catwoman (like Katniss) is an anomaly. She is a “strong woman,” no doubt, but she doesn’t challenge the oppressive systems that hold her down; she manipulates them to her advantage. By featuring a “strong woman” who does this, Arkham City is implicitly stating that women cannot change the systems that oppress them. Instead, they must do as Catwoman does, and turn these systems to their advantage. Doing so means that resistance (symbolized in the game by Catwoman’s violence) is ultimately fruitless; for all the men that she beats up, there are a dozen more who shout derogatory names at her and attempt to attack her.

It is important to note that Buffy is an anomaly in her world as well. Buffy, like Catwoman, proves everyone wrong when she kicks their asses — in fact, one of the reasons behind the series’ creation was the hilarity of the idea that a tiny blonde girl named Buffy can actually be powerful, again displaying the sexist notion of our culture that women are weak and/or stupider than men. (For a great example of the joke in action, check out the first few minutes of S1.12, “Prophecy Girl.” The look on that vampire’s face is priceless.) 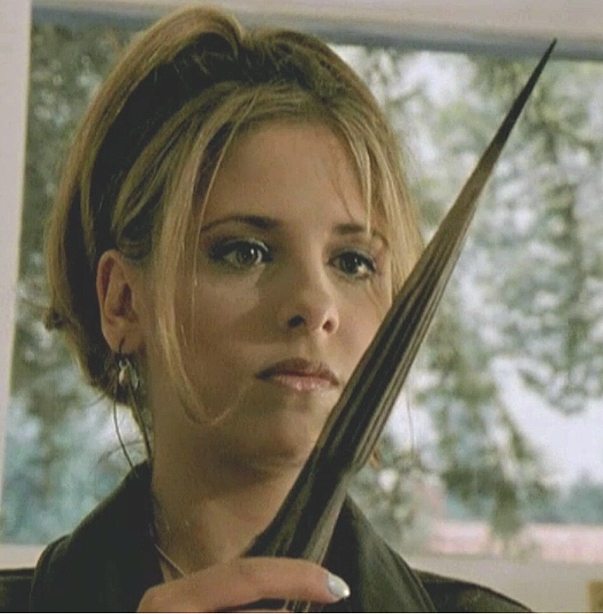 The show often does not hesitate to show that the patriarchy is just as powerful in Buffy’s world as it is in our own by having characters that perceive femininity as weakness. The sixth season’s villain, Warren, is the most obvious examples, calling hot women “baby” and Buffy “bitch,” and telling Xander he hits “like a girl” (S6.19 “Seeing Red”). In the seventh season, when Amy’s curse turns Willow into Warren, she starts crying, then he says, “look at me, crying like a little girl” (S7.13 “The Killer in Me”). But we expect these phrases from him; he is a misogynist, and the show actually identifies him as such: “Warren was a cold-blooded killer of women,” Xander says in S6.21, “Two to Go,” and in “The Killer in Me,” Willow calls him a “murderous, misogynist man.”

The truly insidious nature of sexism becomes evident, however, when characters other than outwardly misogynist villains also identify femininity as a weakness and use “woman” or “girl” as an insult. Many beloved characters do this in the show’s earlier seasons. For example, Giles and Riley both use the expression “throw like a girl” (S3.12 “Helpless” and S5.1 “Buffy vs. Dracula” respectively). Xander warns Anya, “I’m actually turning into a woman as I say this,” before explaining that sex is supposed to be emotionally meaningful (S4.3 “The Harsh Light of Day”). Even Buffy insults Wesley by saying “If I need someone to scream like a woman, I’ll give you a call” (S3.21 “Graduation Day”). Some have criticized the show for portraying sexist ideology, and rightfully so, but when you examine the show as a whole, its trajectory is one of overcoming oppression. Thus, it needed to show us oppression before it could show us freedom from that oppression.

So, both Buffy the Vampire Slayer and Arkham City prove they exist in our (flawed, patriarchal) world. Buffy and Catwoman aren’t expected to be strong because women are perceived as weak. But whereas Arkham City has strong women who manipulate the system to their advantage and thereby seems to implicitly to accept this flawed world as is, Buffy seeks to change it, arguing through its ultimate trajectory that oppression can be overcome by strong women.

Buffy isn’t content to just have her power, which was given to her by a group of powerful men. Buffy would rather share this power with women everywhere, radically altering the power imbalance between Watchers and Slayers (men and women). In S7.22, “Chosen,” the series finale, Buffy’s voiceover captures the freedom from oppression that her spell symbolizes:

In every generation, one Slayer is born because a bunch of men who died thousands of years ago made up that rule. […] I say we change the rule. I say my power should be our power. […] From now on, every girl in the world who might be a Slayer, will be a Slayer. Every girl who could have the power, will have the power — can stand up, will stand up. Slayers. Every one of us. Make your choice. Are you ready to be strong?

The images used during this voiceover include two powerful shots: one of a woman on the floor, the other of a woman stopping a hand from slapping her face and standing tall to look her attacker in the eyes. These two shots, combined with Buffy’s words make it clear that her goal is to undo millennia of oppression. This goal — the ultimate trajectory of the series — is what makes Buffy feminist.

To conclude, I leave you with this snippet of dialogue from S7.1, “Lessons”:

Buffy: It’s about power: who’s got it, who knows how to use it. So, who’s got the power, Dawn?

Dawn: Well, I’ve got the stake.

When looking critically at texts (be they movies, television shows, video games, or comic books), it’s important to remember that the stake is not the power. Female characters may be able to kick ass, but that doesn’t mean that a text is feminist. That text may even uphold sexist norms and values. Just because a woman holds the stake does not mean she holds the power.

NOTE: In a recent discussion on BBC Radio, Neil Gaiman noted that television missed the point of Buffy, stating that though she’s strong physically, that’s not why she’s a strong character. I think that’s pretty neat. (Alderman, Naomi. “Neil Gaiman and Joss Whedon on the legacy of Buffy.” BBC Radio. Dec 19 2013.)

One thought on “The Stake Is Not The Power: Patriarchal Power Systems in Buffy the Vampire Slayer and Arkham City”