2014’s final Moving Pixels podcast at PopMatters covers the ever-divisive Spec-Ops: the Line (Williams, G. Christopher, Nick Dinicola, Eric Swain. “The Moving Pixels Podcast Steps Over ‘The Line’.” PopMatters. Dec 8 2014.). It was a good discussion and it inspired me to review a some of the writing about the game which, in turn, inspired me to replay it. As far as games crit goes, The Line has been the gift that keeps on giving. Since Bioshock: Infinite and The Last of Us landed there’s been altogether way more discussion about them than will ever be needed (Swain, Eric. “Top 13 Most Talked About Games of 2013.” The Game Critique. Jan 30 2014.). Yet, continually, The Line returns as the focus of some conversation or other and it rarely sparks the same backlash. As troublesome as canonization is, The Line seems to orbit close to the centre of game discourse. In replaying it, I see why people want to talk about it but I stand by my original sentiment that Brendan Keogh’s critical analysis of The Line, Killing is Harmless, is more important than the game itself is. I want to flesh out more of my thoughts on this game but they might be a little disorganized; so if ever the flow of this feels unnatural, just assume that I’m embracing the blog form. 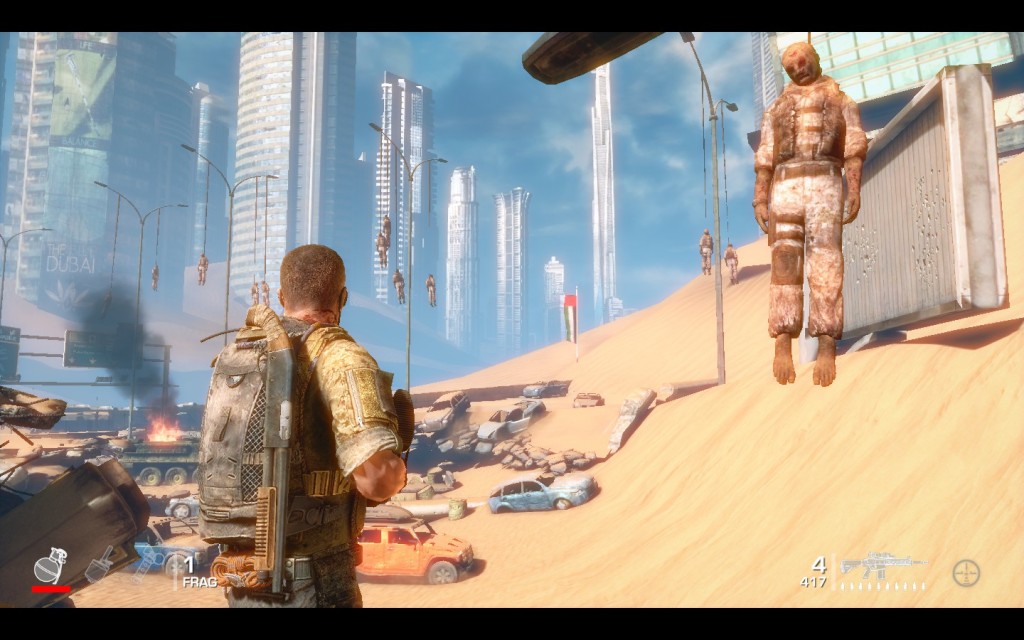 The Line is a very cynical work of fiction. It doesn’t think very highly about its medium, its culture, its country, its player or even itself. Players who liked The Line praised its rawness and players who didn’t like it rejected its cynicism. It critiques war by inundating the player with it, it critiques violence by demanding the player simulate it, it denounces the player’s obedience while forbidding them from expressing themselves. “Pretension” is a word that gets thrown around a lot but it’s appropriate for The Line because the game maintains the “pretense” of High Art™ through reference and design.* The Line is a liberal but obvious reimagining of Francis Ford Coppola’s Apocalypse Now, itself a liberal but obvious reimagining of Joseph Conrad’s Heart of Darkness. The Line piggybacks off the goodwill of both these works and most of the work of communicating its themes and values is done by Conrad and Coppola.

I’m not trying to diminish adaptations: Oh Brother Where Art Thou? is as much an adaptive conversation to James Joyce’s and Homer’s different tellings of Ulysses. Fiction inevitably converses with its traditions, even if it’s rebelling against its source like John Gardner’s Grendel or Jean Rhys’s Wide Sargasson Sea. In many adaptations, The Line included, conversing with precedent is the point. Creation is not a pursuit of novelty alone, and novelty is insufficient as an expression of ideas. So The Line isn’t pretentious because it’s an adaptation, it’s pretentious because it wants  to be (or, perhaps, critics want it to be) a High Art™ videogame without actually clarifying what that means. It has some of the qualities of traditionally approved works—wide landscape cinematography and the repeated symbolic use of fire, for example—that all hammer home how much of a bastard Walker and the player are. Which is effective, but cynical, and even when effective, cynicism can be more valuable for the appearance of profundity than for actually saying something.

I liked The Line and I’m willing to meet it halfway on just about everything, but it works best when understood by theories from other media. To treat it like a videogame or to act like it is the actualization of videogame potential is to make the whole Spec-Ops: The Line experience pretty unimpressive. The Line is meaningful, occasionally beautiful, as a confluence of cinematic and writing techniques. Episodes of play occasionally hold narrative significance but most of them are rigid and forced, which turned a lot of players away from it. Like I said, I can meet if halfway on most things; I can’t express myself in play because the game is indifferent to me even though it’s talking to me. But even with that in mind, the moments of The Line‘s play that are meaningful mostly only mean in conversation with other shooters. Just like framing and writing are meaningful in conversation with Coppola and Conrad, The Line‘s anger and cynicism are not worth much without direct contact with other works. Alone, it’s just angry. It has things to say about authorship, liberty (political and philosophical), bureaucracy, military and intelligence but it speaks the languages of other media, of previous “masterpieces” and proof of its thesis is almost entirely extra-textual. Once again, novelty isn’t some holy grail every writer must comb the earth for, but I think it’s telling that The Line succeeds by pulling so much content from other stories and slapping it onto a shooter template. The Line is what we want it to be because it’s a videogame about videogames coated in culturally validated conventions. 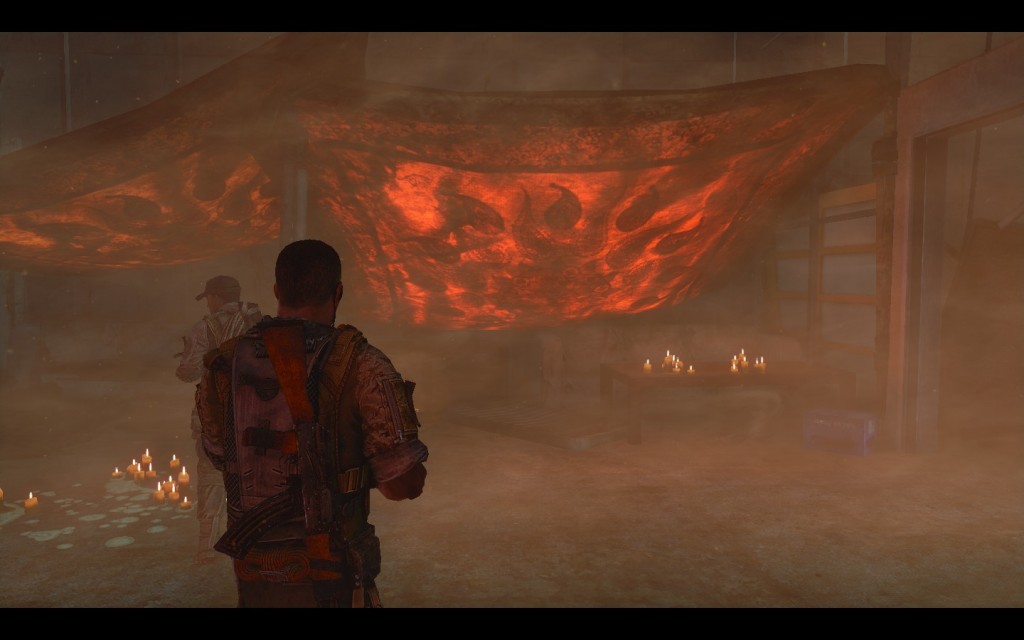 The virtual tour through The Line‘s Dubai is peppered with Apocalypse Now‘s filmic techniques (Taliesin. “Spec Ops: The Line: The Art.” Twenty Sided. Aug 1 2012.), its plot and themes are reprinted from Heart of Darkness, its mechanics are reprinted from Mass Effect and Gears of War. The highest achievement videogames seem capable of is successfully reproducing existing material re-purposed as commentary on videogames. Under such circumstances it’s no wonder videogames and their players are so self-involved.

Much of The Line is told outside of play and what play that does exist is forced, which defies the “form” of videogames as a primarily—or exclusively, depending on who you ask—playful mode of communication. There are instances where play communicates, though. In one scene, there is a model of Dubai city standing before a large aquarium filled with sand. To progress, the player must shoot the aquarium to create a path, thereby burying the model. This moment is a microcosm of The Line. In order to continue with the game, the player must observe a complete model of Dubai and bury it: this is Walker/the player metaphorically destroying the city to move closer to saving it. Walker may not back out, he may not find another path. Walker’s only mode of interacting with Dubai is to destroy it. His mode of progress can only be destructive. Is the player metaphorically acting as the military? as the gamer zeitgeist writ large? American expansionism? Capitalism? In any case, it is a moment where the player enacts a syntagm of meaning. Similarly, in the oft cited white phospherous scene, Walker stares into a laptop, watching the live feed of a targeting drone while firing phosphorous artillery shells into a camp of soldiers and refugee civilians. In this moment, the player enacts Walker’s gaze, staring into a de-humanized weapon that flickers his reflection upon every shot fired.

These moments don’t come with any player accountability, though, and the player has no choice but to act out war crimes before the game calls them a war criminal. Forcing the player down this route is what makes the game so cynical. It states that the soldier (who in this case is not even technically at war with anyone) is only a murderer, the player is only a fanatical fantasist, America is only an imperialist interloper. The game seems fine saying all those things and a lot of people seem fine with hearing it but, man, that’s really bitter. 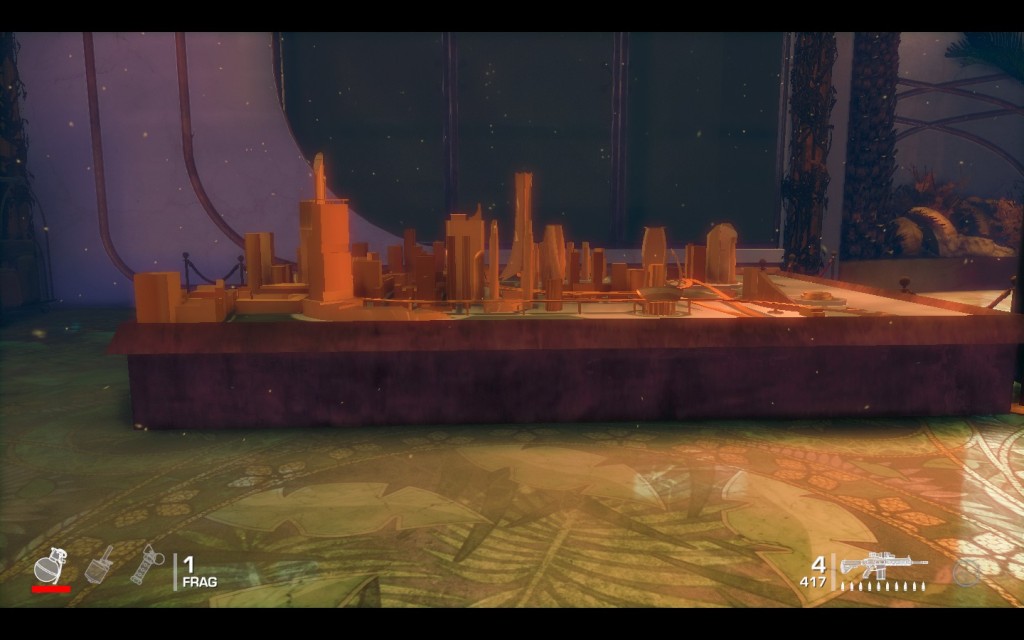 People keep talking about videogames as if they’re a young medium and they’re really not. Games are ancient and even the “video” qualifier has existed in some form or another for fifty years. There are plenty of explanation for games being immature, but newness is not one of them (I sometimes wonder if commercial videogames are more juvenile now than a decade ago). It seems to be the case that we are waiting for a comprehensive videogame theory and mainstream legitimacy will somehow just pop like an achievement after the last cultural milestone is acquired like an audio log. Looking at The Line, I enjoy it most when I don’t limit myself to an existing videogame theory. First, there isn’t really a single satisfactory theory we can use to read videogames (Joyce, Lindsey. “Games Criticism, “Evidence,” and Academia.” The Joycean. Nov 14 2014.) largely because—as illustrated by the nerd-cult’s uproar in the second half of 2014—videogame theory and criticism are actively resisted (Gera, Emily. “The war against critics is as old as the printing press, GamerGate is just another example.” Polygon. Dec 10 2014.). Second, because theory from other studies are often sufficient to unpack most videogames. It isn’t that games aren’t complicated, it’s that the tools to understand what many current commercial games communicate already exist. A game like The Line is best understood not through analysis of its gaminess because the music, writing and cinematography do most of the work for it. Meanwhile, gamier games that lean harder on its form often expect some acceptance of shallowness and blasé conventionality on those other fronts.

And maybe that’s ok. Maybe there’s nothing wrong with being really into videogames or heavy metal or anime or comic books. Maybe your typical videogame is juvenile and kitschy and maybe The Line can only escape that trap by cynically turning against its form and by referring other media’s conventions. It may be time to stop talking about the potential of commercially produced videogames and just accept or reject them on the terms the games, producers and consumers dictate. I don’t believe it’s worth the frustration of seeing a videogame fail as High Art™ because it’s possible to love and appreciate them while also experiencing modes of expression beyond them. In fact, maybe it would be best for us to just appreciate them for the kitsch that they are (Bogost, Ian. “Winning Isn’t Everything.” Medium. Dec 19 2014.). Kitsch can be beautiful and it can be enlightening, maybe even intentionally, but contemporary nerd toxicity has demonstrated that it’s not a healthy place to invest the entirety of one’s self.

For myself, at a certain point, I stopped being interested in differentiating between good art and bad art a while ago, and when I started paying closer attention to what a text says I found a much richer and more satisfying (if unemployable) pursuit. Besides, communication is far more historically, politically and psychologically significant than enjoyment (Polansky, Lana. “The Customer is Often Wrong (FUCK THE PLAYER).” Sufficiently Human. Dec 30 2014.). Replaying The Line has been fruitful. A lot of its messages are a bit on the nose but subtlety isn’t everything and maybe commercial videogames aren’t the place for subtlety anyway. Even if they are, maybe it’s not the end of the world that they aren’t meeting some quota for it.

*I use a loaded term like “high art” for convenience’s sake. Curation and canonization are tricky because they feel inevitable and I admit that I should be more careful with my language instead of hoping that irony will do the work of resisting class conventions in art.

2 thoughts on “The Great Expectations of Spec-Ops: The Line”