The fictional country of Ivalice has been the setting for a number of lauded Square games. It makes for an appealing setting  due to the elaborate and lifelike political drama that deepens in each appearance. In the tumultuous land’s many iterations, there is always a contest for power between military organizations, royal families, economic classes or religious orders, usually in some combination. This is especially true for the inaugural foray into Ivalice in Final Fantasy Tactics, where the player’s Ramza is a participant in an escalating shadow war between the church, the nobility, and the common people. While Final Fantasy Tactics is ambivalent toward religiosity (Filipowich, Mark. “The Complexity of Faith in Final Fantasy Tactics.” Game Church. Aug 2 2013.), it is far more straightforward in its treatment of history. History is determined by which author survives to commit their legacy to text.

Depending on the game, Ivalice resembles either feudal continental Europe or Persia at the height of expansion. In FFT—interestingly, the latest in the timeline—Ivalice appears to be nearing the end of a long dark-age marked by war and disease. The game’s conflicting antagonists are concerned with controlling the coming age by acquiring narrative authority over history. In the opening cutscene the player is directly told the plot’s ending: Delita will be king and he will be loved. The player is also told that the known history was fabricated to solidify the power structure put in place after the brutal civil war. The game chronicles the “true” history presented by the “Durai Papers,” a controversial lost text translated and presumably published by a scholar named Alazlam, a historian in the unseen “modern” Ivalice.

I find myself once again citing Mike Joffe’s excellent essay “Invisible Tactics” to talk about this game: the “found text” structure of Final Fantasy Tactics lends itself to authorial speculation (Re/Action. June 14 2013). We know that the Durai Papers are an alternate take on history, but who’s the author of this history and what do they stand to gain from telling it? Several different interpretations of whose bias the Durai Papers favour are available. But the problems associated with finding a “true” narrator extends beyond the framing device: the Lion’s War itself is a contest for authorship. Nearly every influential character has a story that they are trying to enter into the canon of history.

The warring princes, Larg and Goltana, fight over which story enforces their legitimate rule; Bart tells a story of his philanthropic trading company to conceal his involvement in the weapons and slave trade; Barinten tells a story of aiding orphans and refugees to exploit Malak and Rafa’s rare magic skills; Dycedarg tells a story of Balbane’s sudden terminal illness to turn Zalbag against Ramza. Characters aren’t just dishonest, they take pains to create a fable of themselves to ward off scrutiny. Their actions are hidden until they’re killed or until they’re challenged to mortal combat. As they live, competitors for the throne act in secrecy while a public story circulates through the country. When someone falls, their allies and enemies incorporate whatever details they like into their separate narratives, which redoubles their efforts against one another. Ivalice’s ruling class rules because they keep the masses placated with a story of themselves. 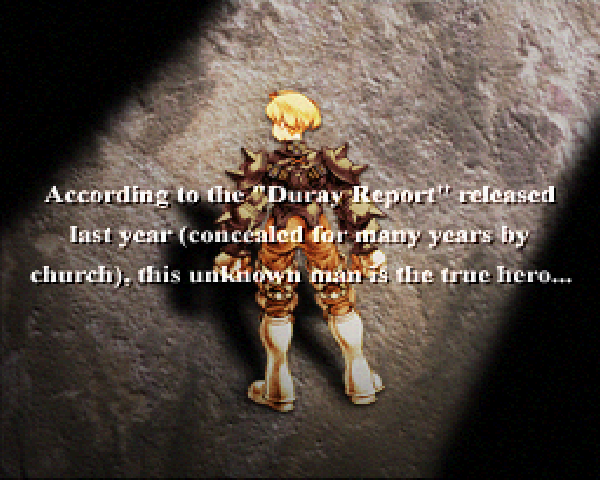 This is especially true of the Glabados church, who seek the holy stones to secure their rule after Larg and Goltana eliminate one another. The holy stones are capable of literally raising demons and restoring life but the church’s primary interest in them is in how they can legitimize their run for power in the eyes of the people. Simultaneously, the church seeks to destroy the Germonik scriptures, a text that the player acquires about halfway through the game. The Germonik scriptures are an account of the Glabados church’s martyr from the perspective of the man who betrayed him. It tells the story of St. Ajora as a man, not as the avatar of God.

According to the Germinik scriptures, Ajora was a spy who engineered a people’s uprising by manipulating the ruling class into destroying itself. After his death, Ajora’s disciples formed a church to preach a divine version of his deeds that would control the rebellion. When a new regime inherited the country, the church’s divine story of Ajora lent his surviving friends the credibility needed to rule. The Germonik scriptures cast the worshipped Saint Ajora and the reviled heretic Germonik in a new light: Ajora is a deceitful revolutionary and Germonik is an honest friend seeking to end his country’s war. The scholar Simon keeps the scriptures secret to prevent a docile population from angrily rising against the church. This is the exact structure of Ramza’s role in the game. The Durai papers cast the heroic people’s king Delita as a cunning manipulator and the heretic betrayer Ramza as an honest warrior in a noble but unsuccessful campaign for peace and justice. Alazlam chooses differently than Simon; where Simon chose not to disrupt the status quo and risk violence in favour of upholding an unjust political system, Alazlam documents his rereading of history for reasons and results the player can know nothing about.

Only when a version of history is agreed upon by a victor and all alternatives are buried or destroyed can Ivalice move on as a nation. The story of history is in constant flux and the country’s values are adjusted to fit the climate of the new age. Ajora emerges as the victor of his time and becomes his world’s Christ; his enemies are painted as heathens and his victory as divine. The only credible threat to Ajora is an alternate text, the Germonik scriptures, that tarnishes his legacy and sparks another grand civil war in Ivalice. When the dust settles on the new war, Delita is a beloved king and his enemies, Ramza and Orlan, are forgotten as heretics, only to truly challenge him through another text in the Durai papers.

Throughout Ivalice’s corrupt history there is a recurring figure that fights on behalf of the people but ultimately goes too far. Accompanying this figure is a calm and benevolent friend that tries and fails to prevent the carnage only to be killed or chased away by the new regime. In Final Fantasy Tactics, history literally repeats itself as the ruling class controls the country’s narrative. The player never sees what kind of world Alazlam lives in or what—if anything—he risks by publishing his findings, but it’s significant that hope for resistance against an oppressive government always exist so long as different accounts of history exist.