Between review games I’ve been picking away at Deus Ex: Human Revolutions. It’s a game with a fair share of problems: the shoehorned-in boss fights completely break the game’s tone, its plot and characters are wafer-thin, some of the character designs are a self-parody and it’s clumsy with some of its more complicated themes. Still, I don’t think I’ve played a game that so poignantly tributes Philip K. Dick and William Gibson while maintaining its own originality. For the most part it very intelligently addresses many 21st century paranoias: the sanctity of the body, surveillance, the corporate government, media monopoly and so on. Furthermore, the level design appropriately leans heavily on player exploration, it’s a world filled with details, the music is spectacular and the stealthy detective-based gameplay perfectly matches the sci-fi noir aesthetic. Colin Dray  catalogues many of the strengths and problems of the game over at Medium Difficulty (“Deus Ex: Human Revolutions: A Bold New Future Mired in the Past.” Jul 10 2013). At any rate, it’s a game that gave me a good deal to think about that I’d like to share here.

As I mentioned DE:HR is not perfect—actual human beings were paid in money to make this scene a necessary part of the game—and I’m basing this essay off my experience of the game, which I feel may differ from most other players’. To wit: I played through the game determined to be a pacifist. I failed in this and the failure struck me as thematically appropriate. Of course, it’s possible to play the game like any other shooter, but I feel like that makes it a much worse game. Violence in DE:HR creates a unique tension: at the same time the game expects violence from its player it offers excuses for committing it, and yet it felt so out-of-place in such a believable world.

There’s nothing revolutionary in suggesting that shooters are saturated in violence. It’s in the name: There is shooting and you are the one who shoots. The player is a floating gun whose interactions are limited to what they shoot at. There are games that use this structure as a clever commentary on how violence operates within the genre, the standard examples being Bioshock (Wang, Lorenzo. “Bioshock Explained.” noisewar internetlainen. Sep 1 2007) and Spec-ops: The Line (Dinicola, Nick. “Spec Ops: The Line Shames My Happy, Violent Memories.” PopMatters. Aug 17 2012.) with Binary Domain being an overlooked gem in this regard (Filipowich, Mark. “Just Killing in Binary Domain.” bigtallwords. May 9 2013). However, it’s rare that such an omnipresent threat of violence suits a game. In all the above examples, the critique lies in how players become habituated to the violence; how violence becomes normal and then it becomes the only means of behaving around other people. Deus Ex: Human Revolution, however, doesn’t go down this route. Rather, it is the threat of violence that has meaning along with the ways that responsibility for violence and oppression can be deflected to somebody else. Violence in DE:HR is always possible, it’s always excusable but it never really fits, which resonates with its overall theme of deferring responsibility.

Early in the game, after the obligatory but well-designed Half-Life-esque tour through the average day at the office, the player-character Adam Jensen is tasked with fighting his way though a terrorist attack. The bad guys act like bad guys—they kill civilians, they shoot to kill upon seeing the player—they’re heavily armed and they’re physically augmented to kill more efficiently. In the context of the fiction, it makes sense for Jensen to use lethal force against them. There are only a few of these soldiers, they can be avoided and it makes sense to avoid them (they’re dangerous and difficult to kill) but if the player gets a clear shot at an unsuspecting villain there’s no moral qualms in taking it. The terrorists in this tutorial might as well be the monsters of Doom or of the aforementioned Half-Life.

After the tutorial, we learn that Jensen’s employer is on the forefront of integrating machines into human beings to assist in life or on the job. The home office is bright white with a few columns holding up the low ceiling. Their are few stairs, everything is rounded and wide Roman-inspired architecture; everyone is equal, looking around rather than up at anybody. Consider how the above pictured LIMB clinic and Jensen’s home office are architecturally modelled after religious and government buildings respectively: the future’s church is a hospital that installs machines into human bodies and its legislative body is a place of commerce. At the top floor the big boss, David Sarif—think Michael Bluth‘s vulnerability mixed with Francis Underwood‘s duplicitous charm wrapped in Mr. Butlertron‘s enchanted sweater-vest—promises Jensen and the player over and over that “we do good things, Adam.”

Step outside the office to the streets of Detroit and a different future emerges. The streets are greasy, graffiti and trash are pasted over the identical buildings and the air bleeds dull gold light pollution. Most immediately visible is the police presence. Cops in full combat gear march up and down every street with machine guns. Early in the game, while I was still getting to know the layout of the streets, one of these cops swore a cuss at me. Because I’m a child, I threw a cardboard box at him. Immediately he, his partner, and another unseen pair of cops watching from a nearby rooftop lit me up. 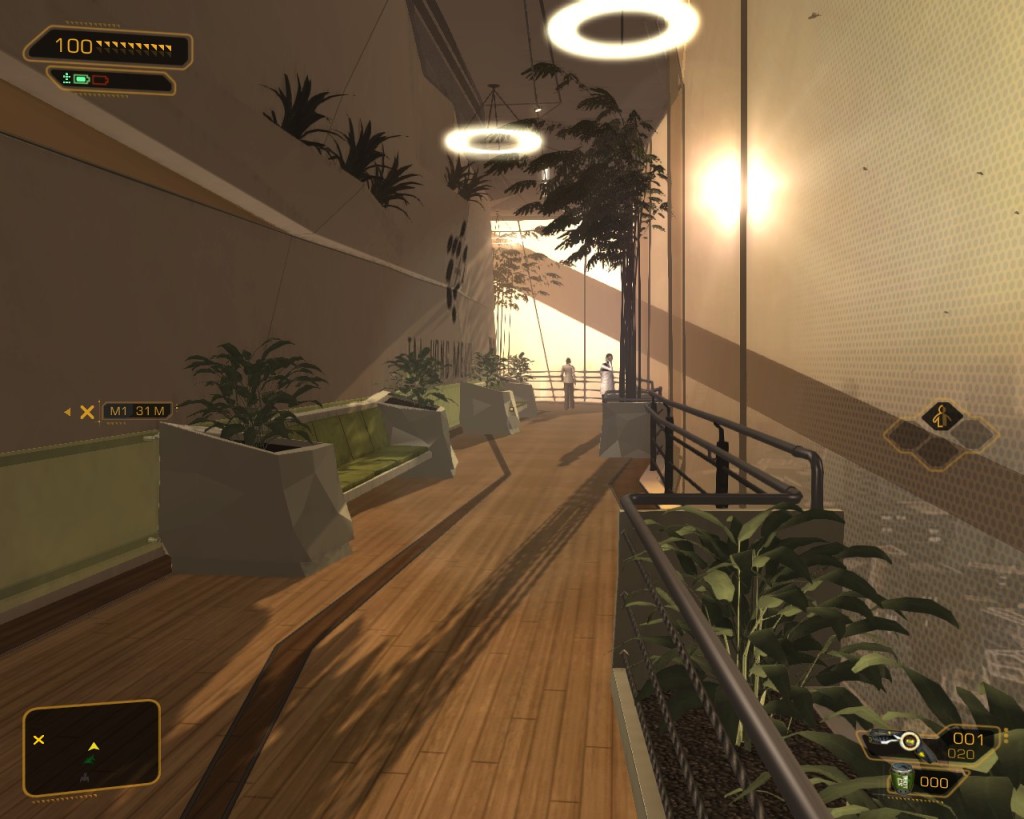 I appreciate that the developer programmed enemy AIs to react to any aggression from the player but I was nonetheless impressed by how fitting this reaction was in terms of story. These police officers have more equipment than entrenched soldiers, they’re positioned across the streets to watch pedestrians through the scope of a rifle and they’re so twitchy that they’d rather unload a clip into a piece of errant garbage than take their chances. Jensen is reborn as a machine and the police appreciate what that means (Tremblay, Kaitlin. “Masculinity and the Embodied Machine in Deus Ex: Human Revolution.” thatmonster. Dec 8 2012). Jensen has knives concealed beneath his skin, he can leap from buildings, he can fire anti-vehicle weapons accurately from a full sprint, he can become invisible. How are police supposed to contend with people like that running around their streets? Kill them. The first sign of trouble, just kill them.

About halfway through the game I encountered same quandary in DE:HR‘s world, where the use of deadly force is so widely and irresponsibly distributed that it can only be contained with deadlier force. Jensen and his sidekick, Malik havw their helicopter shot down and land in an abandoned factory district. Jensen is jettisoned from the cabin and Malik is trapped inside. Soon after, armed goons surround the downed vehicle. As mentioned, I played with intention of not killing anyone, but a stun gun with four darts isn’t much use against a kill squad of over a dozen. I tried over and over, but I was unprepared to directly fight off such a formidable force. Eventually, I had to choose between these dozen or so men (who were only following orders) or my friend Malik. On the sixth or seventh re-load I punched out the nearest combatant, lifted his shotgun and chose Malik’s life over theirs. 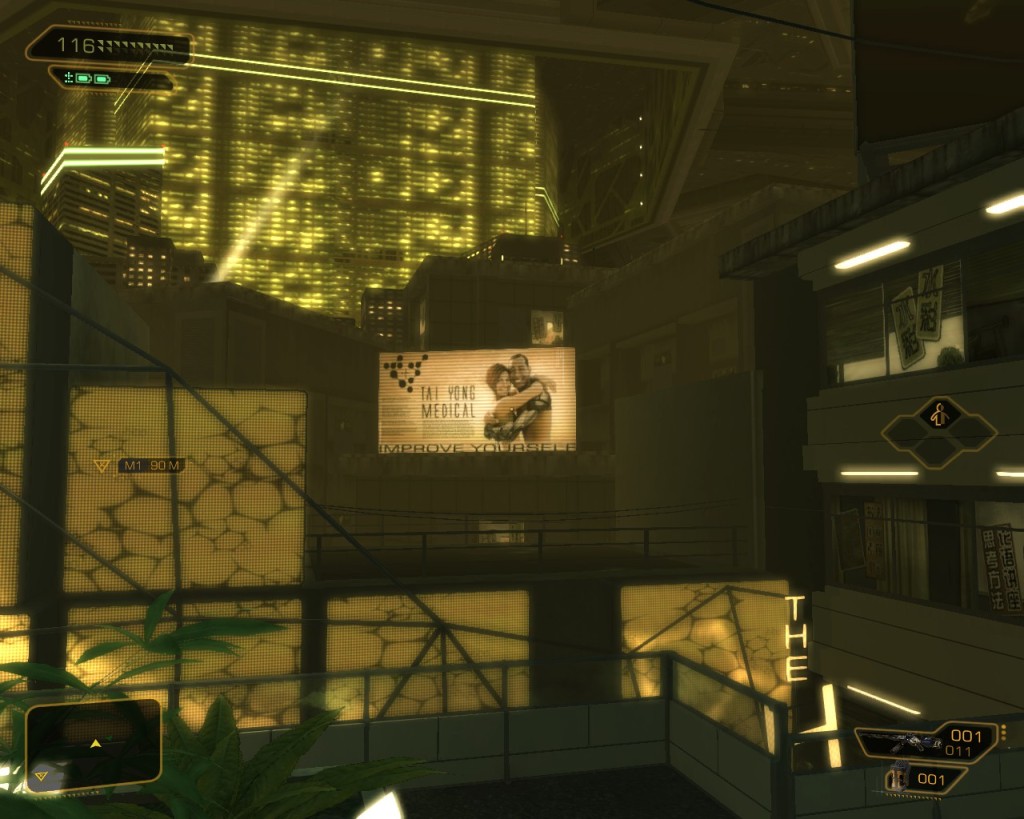 Jensen (read: I) did everything he could to use his gift responsibly. He hadn’t taken a single life before that encounter, but his hand was forced. That’s what DE:HR‘s greatest success is, the way it continually defers responsibility from one person or organization to another. The overworked white-collar office workers in the upper-middle class hate the working poor rioting over their work (“we’re helping people, Adam”). The labouring classes hate the cops for strong-arming them into shitty neighbourhoods. The cops hate the educated elite for debating and legislating the technologies that make urban centres progressively more dangerous. DE:HR is a cacophony of voices that the player hears or (quite unethically) reads in hacked emails. All of them are quite reasonably saying that “this isn’t my fault, we’re helping people.”

Jensen (again, I) was doing the right thing in using non-lethal force to defend himself. But he was still selling the handguns and grenades he picked off his downed attackers to illegal weapons dealers for spending money. He was doing good detective work by breaking into every apartment on the block to collect information from people’s personal computers. But he was still snooping into strangers’ private lives for his own gain. But he’s still a good person, durnit, he’s doing the right thing, He’s Helping People.

Deus Ex: Human Revolutions does have its failures. The plot is totally forgettable and Jensen himself has absolutely no personality, the Jensen-as-saviour subplot totally breaks from the game’s themes as much as the admittedly sometimes fun boss fights and there are some missed opportunities to introduce interesting new mechanics around the tired RPG leveling up formula—most of the world’s cybernetic “augs” develop a chemical dependence on a drug that facilitates their metamorphosis, imagine a mechanic where not getting a fix in ever-shortening intervals resulted in a level-down, for example. But it really captures the contemporary political climate that has a myriad of organizations and allegiances all deferring blame for the world’s problems. 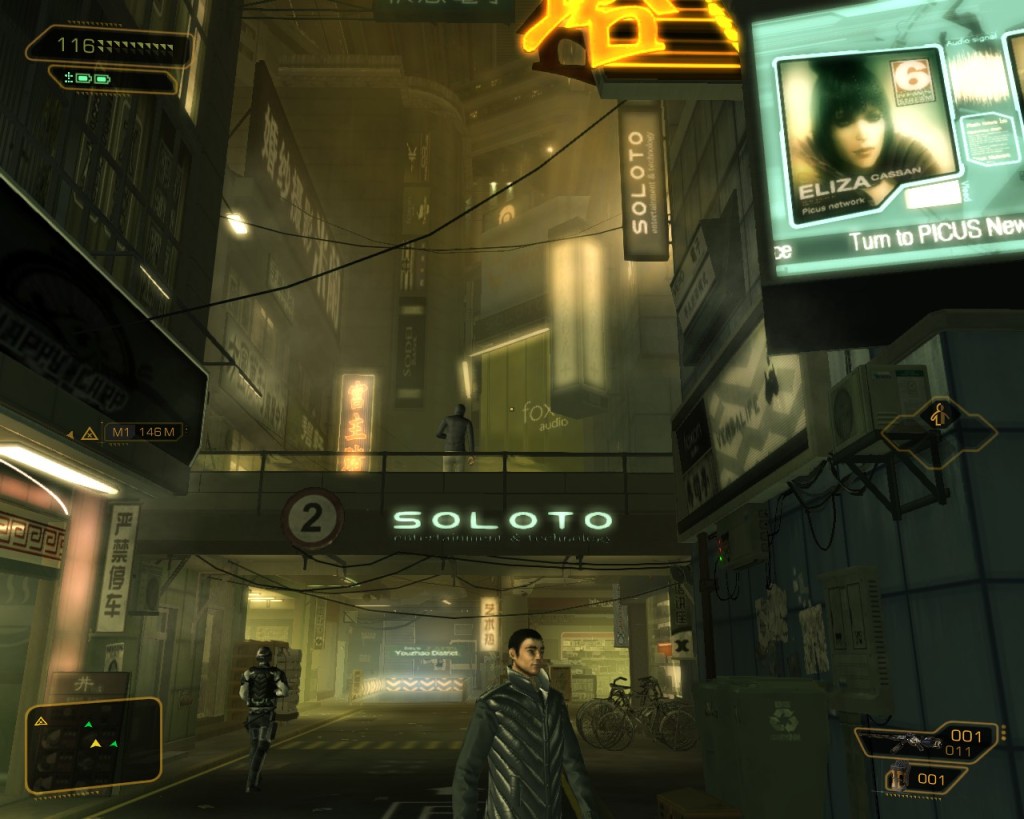